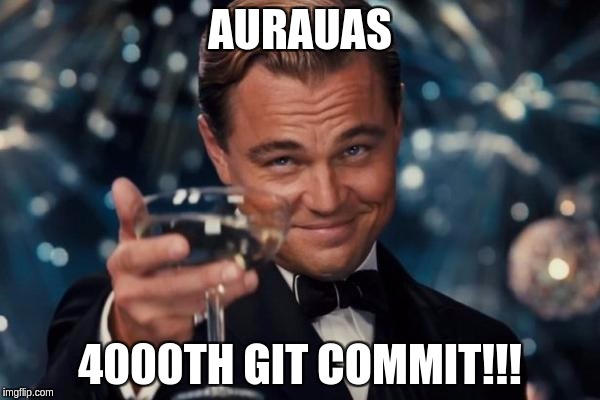 Few people really know much about the AuraUAS autopilot system, but this post celebrates the 4000th git commit to the main code repository!

The entire AuraUAS system is hosted on github and can be browsed here:

AuraUAS traces it’s roots back to a simple open-source autopilot developed by Jung Soon Jang to run on the XBOW MNAV/Stargate hardware back in the 2005-2006 time frame.  I worked at the University of Minnesota at that time and we modified the code to run on an original 400mhz gumtsix linux computer which talked to the MNAV sensor head via a serial/uart connection.

From the mid-2000’s and through the 2010’s I have been advancing this code in support of a variety of fixed-wing UAS projects.  Initially I called the system ‘MicroGear’ or ‘ugear’; which was a nod of the head to my other long term open-source project: FlightGear.  Along the way I aligned myself with a small Alaska-based aerospace company called “Airborne Technologies” or ATI for short.  We branched a version of the code specifically for projects developed under NOAA funding as well as for various internal R&D.  However, throughout the development the code always stayed true to it’s open-source heritage.

In the summer of 2015 I took a full time position in the UAS lab at the Aerospace Engineering Department of the University of Minnesota.  Here I have been involved in a variety of UAS-related research projects and have assumed the roll of chief test pilot for the lab.  AuraUAS has been central to several projects at the UAS lab including a spin testing a project, a phd project to develop single surface fault detection and a single surface flight controller on a flying wing, and several aerial survey projects.  I continue to develop AuraUAS in support of ongoing research projects.

From the start AuraUAS has been designed with the expectation of a small embedded (arduino-style) processor to handle all the sensor inputs as well as the actuator outputs.  A ‘big processor’ (i.e a raspberry pi, beaglebone, gumstix, edison, etc.) is used for all the higher level functionality such as the EKF (attitude determination), flight control, mission management, communication, and logging.  The advantage is that the system can be built from two smaller and simpler programs.  The ‘little’ processor handles all the hard real time tasks.  This frees up the ‘big’ processor to run a standard linux distribution along with all it’s available libraries and fanciness.  So AuraUAS is built around two simpler programs versus the one really complicated program architecture that most other autopilot systems use.

Because of the big/little processor architecture, the big processor doesn’t need to do hard real time tasks, and thus can be written using a single-threaded architecture.  This leads to code that is far simpler, and far easier to understand, manage, and maintain.  Anyone who has tried to understand and modify someone else’s threaded code might have a small inkling of why this could be important.  How many large applications suffer through a variety of obscure, rare, and nearly impossible to find bugs that maybe trace to the threading system, but no one knows for sure?

The ‘big’ processor in the AuraUAS system runs linux, so we can easily incorporate python in the mission critical main loop of the primary flight computer.  This has the advantage of further simplifying coding tasks and shortening the edit/compile/test development loop because there is often no need to compile and reflash code changes between test runs.  You can even do development work remotely, right on the flight computer.  For those that are skeptical of python in the critical main loop, I have successfully flown this system for 2 full flight seasons – all of 2016, and all of 2017.  The main flight computer is hitting it’s 100hz performance target and the memory usage is stable.  Speaking of myself personally, my python code is almost always less buggy than my C code.

AuraUAS is a hybrid C++/Python application.  Some modules are written in C++ and some modules are written in Python.  My choice of language for a particular module tends to center around peformance versus logic.  Our 15-state EKF (also developed in house at the U of MN) remains C++ code for performance reasons.  The mission manager and individual tasks are all written in python.  Python scripts greatly accelerate coding of higher level logic tasks.  These typically are not performance critical and it s a great fit.

What makes this hybrid language system possible is a central property tree structure that is shared between the C++ and Python modules within the same concurrent app.  Imagine something like a dictionary() structure in javascript or a dict() structure in python (or imagine a json structure, or even an xml structure.)  We build an in memory tree structure that contains all the important shared data within the application, and then modules can read/write to the structure as they wish in a collaborative way.  This property tree fills much of the same place as ‘uorb’ in the px4 software stack.  It glues all the various modules together and provides a structured way for them to communicate.

When you hand over control of an airplane to an autopilot (even a small model airplane) you are putting an immense amount of trust in that hardware, firmware and software.  Software bugs can crash your aircraft.  It’s important for an autopilot to be immensely robust, for the code base to be stable and change slowly, for new changes to be extensively tested.  The more complicated a system becomes, the harder it is to ensure robust, bug free operations.

Throughout the development of the AuraUAS project, the emphasis has been on keeping the code and structure simple and robust.  The overall all goal is to do a few core simple things very, very well.  There are other autopilot systems that have every feature that anyone has ever suggested or wanted to work on;  they support every sensor, run on every possible embedded computer board, and can fly every possible rotor and fixed wing airframe configuration.  I think it’s great that px4 and ardupilot cover this ground and provide a big tent that welcomes everyone.  But I think they do pay a price in terms of code complexity, which in turn has implications for introducing, collecting, and hiding bugs.

The first commit in the AuraUAS repository traces back to about 2006.  So here’s to nearly 12 years of successful development!