ATI has been developing a number of flight control system building blocks and we have been testing them on my Senior Telemeaster airframe.  This week I decided to connect them up to create a simple SAS (stability augmentation system.)

Briefly, when flying with an SAS, the pilot is still 100% in manual control over the airplane, however we have inserted a flight computer in between the pilot control inputs and the control surface actuators.  Rather than the pilot’s stick commands directly moving the control surfaces, the pilot stick commands are translated to roll and pitch “rate” requests.  The flight computer keeps track of the target pitch and roll angles and adjusts these according to the pilot’s stick inputs.  The more the pilot deflects the control stick, the faster the aircraft rolls or pitches in that direction.  When the pilot centers the stick, the flight computer holds the current bank and pitch angles, even if there are throttle or speed changes, gusts and turbulence, etc.

Here is a video of my very first SAS test flight:

The first flight test went pretty much according to script.  The basic mechanics of the SAS worked as planned and produced reasonably stable and smooth flight.  Transition between direct manual control and SAS flight was smooth. After the flight I adjusted two things.  First, my gains were set way too low.  Even at full stick deflection, the system responded much too slow to be intuitive for an average pilot.  Second, I had used an exponential control mapping.  This means that near the stick centers, I have to move the sticks a lot to produce just a little bit of aircraft response, but as I near the extremes of the stick deflection range, the rates ramp up quickly and the aircraft responds at maximum (programmed) rates.  Below are two plots that show the difference between linear and exponential input mapping. 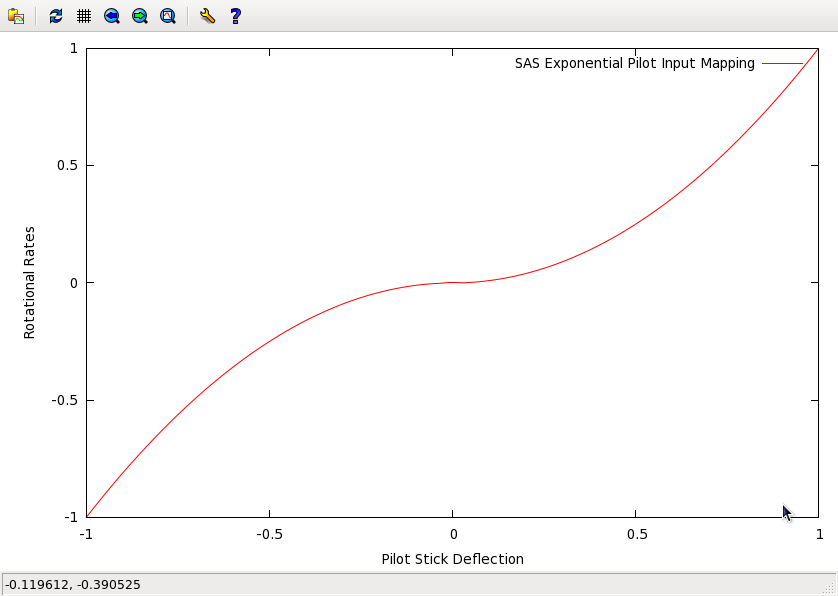 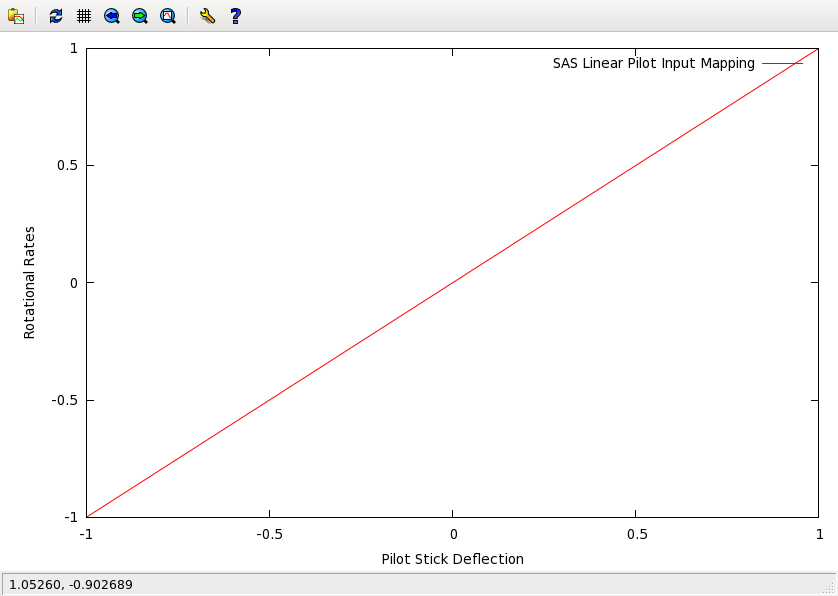 I had a little fun on the first landing.  I included it all in the video posted above.  After a couple low slow approach passes followed by a go around, I figured I had enough confidence in the system to attempt a full landing. However, the combinations of gains being set way too low along with exponential input mapping meant my flare was way way way too slow and from the video you can’t even see any pitch up at all even though my stick was pulled all the way back.  I hit so hard I sent the camera tumbling … sky / ground  / sky / ground 🙂  Every thing was fine … I’ve had rougher landings once in a while even under pure direct manual control.

After this flight I tripled the gains and switched to linear input mapping and the result was something that is much more intuitive to fly and allowed me to do some nice landings on subsequent flights.  The system still isn’t perfect and needs some more tuning and fiddling, but for the first day out in the field after a couple days of intensive coding, I am really happy with the results!

Here is some video from my last flight of the day: