In previous posts I’ve described the process of carefully modelling the basic geometry and mass properties of a UAS in YASim to provide a real time flight dynamics simulation of the aircraft in FlightGear.  I also described how we carefully modelled the blended body shape of our UAS using airfoil plots and spline curves.  These curves were then imported into MoI and used as the basis to generate a smooth, flowing, organic surface shape.  MoI is able to export the model as a 3d triangle mesh in a variety of formats including 3ds. 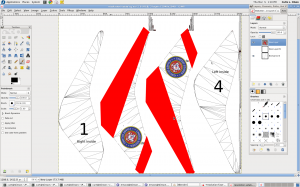 FlightGear can directly import 3ds models and render them in the simulator.  However, I found that my model needed be cleaned up in several respects.  All of this discussion relates to Blender – a very capable open-source 3d modeling tool. This isn’t intended to be a blender tutorial, but a brief overview of the steps involved in preparing a model for use within FlightGear

Textures and Painting and UV Unwrapping

This could be the subject of a book just by itself, but let me give a really quick summary.

Blender has a cool feature called “UV Unwrap” which is found in the “Mesh” menu when you are in “Edit Mode”.  There are several unwrap options, but I found “Unwrap (Smart mode)” worked the best for my purposes.  The following image shows how blender unwraps the mesh (in this case the wings and elevons.)  In the bottom panel I selected “UV/Image Editor” and it shows the unwrapped mesh image. 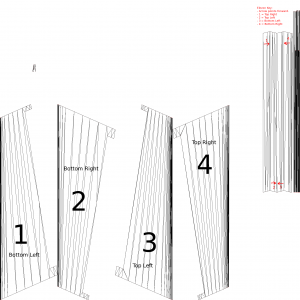 Now here’s the cool thing.  You can save this image out to a file and then import it back in.  Blender will use the imported image to texture the file exactly as it has been unwrapped.  So with this template image you would see a model that looks like a wireframe.  I then loaded up the images in blender and labeled each panel with a big number.  Inside FlightGear (or osgviewer) I could then identify which number corresponded to which panel (top left, bottom right, etc.)  I further edited the template file to include this extra information.  The result when drawn in FlightGear looks like this: 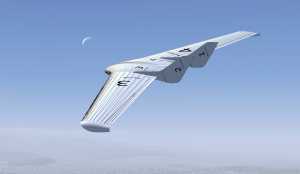 Now I have my “paint kit”.  I can load up the templates in gimp (or photoshop), create a new layer, and draw my color schemes and markings over the top.  For the wing panels, I did a quick hack of a coast guard-ish color scheme which looks like this: 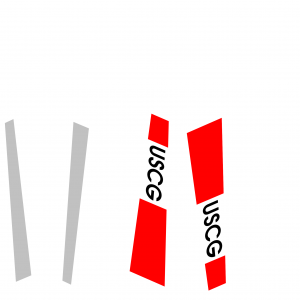 I then export just the marking/paint layer back out to my texture files that the model references and the “finished” result looks like this: 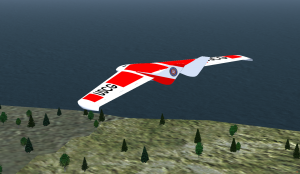 This is still a work in progress.  I have yet to animate the control surfaces.  I also need to add a spinning propeller.  The paint scheme is just a quick example and could use many many improvements.

With the paint kit established, a variety of paint schemes can be developed.  Here are two more examples: 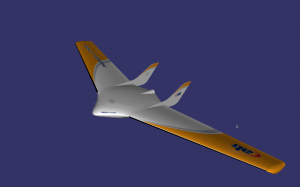 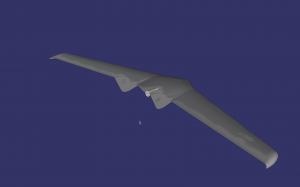 There are many steps required to model a new aircraft design in FlightGear.  Primarily this involves creating a flight dynamics (physics) model and a 3d model of the design.  Each step requires several sub-steps and there is always room for improvements and refinements.  This is an example of an R/C scale UAV.  Full scale aircraft are much more complicated involve detailed cockpits, many more animations, much more complicated 3d meshes, and much more work texturing and painting.  Hopefully I have provided a taste of what’s involved.  With a little effort any one can jump in and learn the tools to build simulated aircraft.  But it does take time and patience.

Finally, here is a (sorry, kind of crude) youtube video showing the model flying inside FlightGear: