MoI (Moment of Inspiration) is a really interesting 3d modelling tool.  There are two things that separate it from other tools in my view. 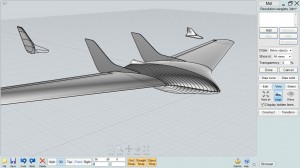 You may refer to my previous post related to modeling with perl.  I used a perl script (math + airfoil data + spline curves) to carefully define exact lengthwise slices along the fuselage.  I then imported these curves into MoI and stretched a “network” surface over them.  It’s about a 10 minute job in MoI and I have a beautifully smooth curved fuselage.

I adjusted my perl script to also generate the exact airfoil profile at the wingtip and imported that curve in the correct 3d location.  This allowed me to quickly built an entire wing using the “sweep” function.  I then added a motor tube (which is just an extruded circle to make a cylinder.) 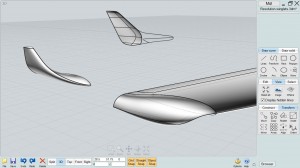 I used a similar approach to create a nice curvy winglet.  from the picture you can see I designed two different styles of winglets.  I think I like the looks of the drooping winglets better.  I don’t know yet what we’ll end up with on the real aircraft.  We’ll probably design the wing tip so we can mount any winglet design that we’d like.  You can also see in the background that I was playing around with designing a shaped vertical stab.  These will mount inboard and be the primary yaw stabilizer.  It took me no more than 10 minutes to create each winglet shape in MoI.

The ultimate goal is to create an accurate 3d mesh of the aircraft.  This will be combined with the dynamics model to produce a realistic and visually compelling real time simulation of the design in FlightGear.  MoI has several mesh export options and allows you to tune the mesh density so it is a perfect front end design tool for really nice 3d models.

MoI is a really awesome 3d design tool.  I can’t speak highly enough about it.  I am merely a novice at 3d modeling, you can browse the MoI forum and find many incredibly brilliant designs that the experts are creating. MoI is a commercial application, but if you are building “organic” shapes with curved surfaces, it is worth every penny.