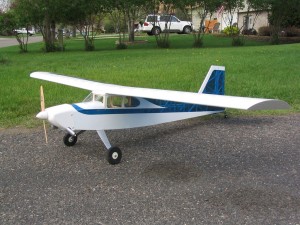 My first goal is to have fun and use this as an outlet for a few ideas that have been bouncing around in my head. I have a life long love of aviation, airplane models, and computers so I would like to mix these together a bit.  I have an FMA Direct CoPilot IR stabilization system that I plan to use to keep the aircraft self stable. Notice that this is instead of any type of gyro/accelerometer/IMU unit. An IMU typically reports orientation as input to a flight computer which then does mathemagic to calculate servo positions to keep the plane level. This IR unit does all that itself in a$100 unit. The downside is it can only hold the wings level, the upside is that is usually exactly what we want to do.

I also have a small flight computer, a First Robotics Minicontroller. This has a CPU and can drive servos directly. I hope to attach a GPS, do a small amount of crunching and then drive the rudder servo to steer the aircraft to a waypoint (such as home.)

I also hope to use this to do some sort of aerial photography … either wireless video, or digital stills, or both.

Beyond that it would be fun to add a radio modem to pass telemtery information to a ground station and perhaps pass commands back to the onboard computer system. I could envision some integration with FlightGear to use that as synthetic vision or overlay the live camera view on top of the synthetic view.

I am funding this project on a hobby budget. So I plan to scrimp and save, reuse existing equipment, buy off of ebay, etc. and only move as fast as my spare funds will allow. My goal is to build a self stable, self navigating R/C aircraft for under $1000 total cost.

Let me just say a brief word about safety and politics. I understand the AMA is concerned about UAV projects. They don’t want irresponsible behavior ruining the hobby for everyone else. I plan to always operate this aircraft under the constraints of the AMA safety code. (i.e. always in visual and radio range, always within the R/C model altitude limits, always with a human pilot able to assume manual control at any instant.) I also understand the FAA doesn’t really know what to do with UAV’s yet and has no immediate plan for fitting them into the USA airspace. Again, I plan to operate this aircraft entirely as a R/C model aircraft which the FAA is not interested in regulating.

Throughout this project I plan to pay keen attention to safety issues, fault tolerance for the onboard systems, safety for the pilot, safety for the aircraft, and safety for everyone else. I know I can’t control every aspect of every circumstance, but I wish to be very thoughtful, and very considerate of a wide range of safety issue so that (1) the aircraft itself is fault tolerant as much as possible, (2) the on board intelligence will be able to detect some problems before the pilot on the ground and take steps to minimize or avoid damage to the aircraft, and (3) I will operate the aircraft so that if something does happen, it will happen as far away from any person or property as possible.

I believe this approach is essentially restating the spirit of the AMA safety code with fewer specifics.