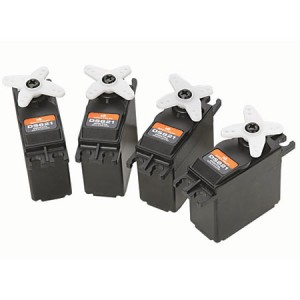 Here are a few random notes on the APM2 and servos.

As we all know, the servos are controlled by sending a digital pulse on the signal line to the servo.  The length (time) of the pulse maps to the position of the servo.  A 1500us pulse is roughly the center point.  900us is roughly one extreme and 2100us is roughly the other extreme.  Different systems will use slightly different numbers and ranges, but these are good numbers to start with.  Historically, RC systems stacked the pulses for multiple channels on a single radio signal — affectionately called the “pulse train.”  If you crunch the numbers — given a max pulse width of about 2000us and a bit of inter-pulse spacing, we can send about 8-10 channels of data at 50hz on a single signal line.  Standard analog servos are designed to expect 50 pulses per second and can misbehave if we send a faster signal.

With modern 2.4Ghz systems, the servo/channel data is sent digitally and at much faster data rates.  Receivers drive each servo pulse concurrently and the concept of a “pulse train” is largely gone — as is the need to space things out at a 50hz rate.  If you crunch the numbers again and look at a max pulse width of 2000us with a bit of inter-pulse space, we can actually send servo data at 400hz to a digital servo and it will respond as expected.  (8 channels at 50hz, 1 channel at 400hz — makes sense.) 🙂

What does all this mean to an UAS builder?

The APM2 has the ability to set the PWM frequency for the output channels.  Channels are grouped and several hang from a single clock generator so we can’t change the PWM rate individually, but we can do it for groups of channels.  Question: if our system is running at a full 100hz update rate, does it make sense to set the servo output rate to 100hz or something higher?  I argue that we should set the output rate as high as is possible (400hz) because the servo will pick up a change fractionally quicker at a 400hz output rate than at a 100hz output rate.  In the end though, most servos are somewhat noisy and crude and subject to physics, so it may not have a huge noticeable effect, but any little thing that makes the system more responsive and increases the end to end throughput from sensing to responding is welcome.