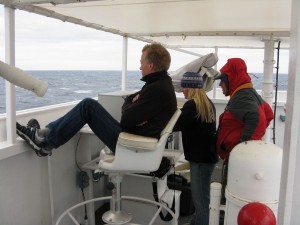 On April 2, 2008 I found myself on a 224′ NOAA research ship, the Oscar Sette.  We were sailing about 1000nm north of Hawaii in the middle of the Pacific Ocean. This was day 10 of a nearly 3 week cruise.  Our mission was research. The task for the day was to search for debris. We had entered the North Pacific Gyre two days earlier. This is often called the “garbage patch”. A debris field of floating plastic junk the size of Texas.  It is made up of human generated plastic waste that never really decomposes, instead it very slowly breaks up into smaller and smaller chunks.

A Spotter Sees Something! 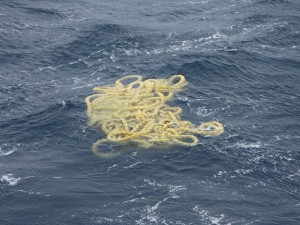 Early in the afternoon, the call went out. One of our spotters saw something, and it was much bigger than the ordinary floats and chunks of plastic we had been seeing.  We turned the ship towards the object.  When we pulled up closer we discovered it was a houser line — a giant rope used to secure large ships. 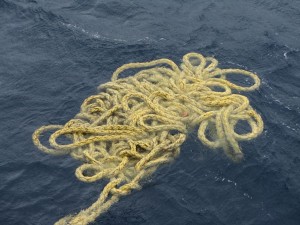 When we were close enough, one of the crew members snagged the line.  We hooked it to a hoist and carefully pulled it on board. 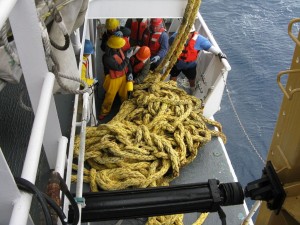 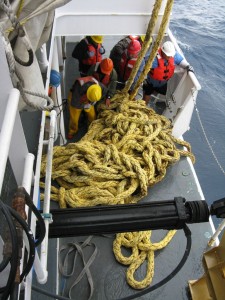 We then attached an ATI gps tracking buoy to the rope and set it free.  The decision was made that the research value of observing the drift of this debris through the ocean currents was higher than simply removing the object from the ocean.  The deck crew then lowered the tangle of rope back into the water and set it free.  Here  you can see it drifting away with the buoy attached (the solar panels at the top just peek above the water line.) 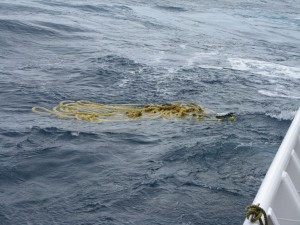 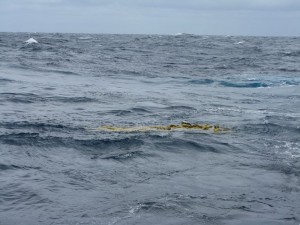 This was THREE years ago now and the buoy is still alive and reporting it’s position twice a day.  Aren’t you curious where it’s been?!?

Drifting through the North Pacific

The following video shows an animation of the ATI tracking buoy on it’s three year journey.

I think this is incredibly fascinating to watch, and the buoy continues to send position updates twice a day, each and every day.  It has solar battery chargers so it could survive a few more years with a little luck.

As of this posting, buoy 15FXZ is still alive and well and drifting around the ocean. You can check up on it’s latest movements anytime by clicking on the following link:
http://www.atiak.com/buoy_maps/
At the top of the map is a drop down menu. Select 15FXZ (should be the very last entry, you might have to scroll), pick a date range if you like, and click “Go”!

It is difficult to capture the magnitude and power of the ocean in pictures.  The waves always somehow look smaller and less impressive through a camera.  I took some video footage while the houser line was pulled up on deck.  You can see the wind, the spray, and how much the ship pitches up and down in the waves.  If you’ve never been out in these conditions, they are pretty typical of the north pacific, but getting tossed around like that 24/7 makes it very difficult to do anything.