I bought this aircraft used off of Ebay, mostly on a whim. I threw in a last minute bid, and to my horror I won. Now what do I tell my wife?!? 🙂 I fixed up a number of things such as adding a tail wheel, putting checkerboard on the bottom of the wing, fixing some shipping damage, replacing a missing carburetor screw on the engine, etc. It is a very nice aircraft, a wonderful flyer, and looks very cool from every angle in the air and on the ground. I really like the Super Sportster lines. 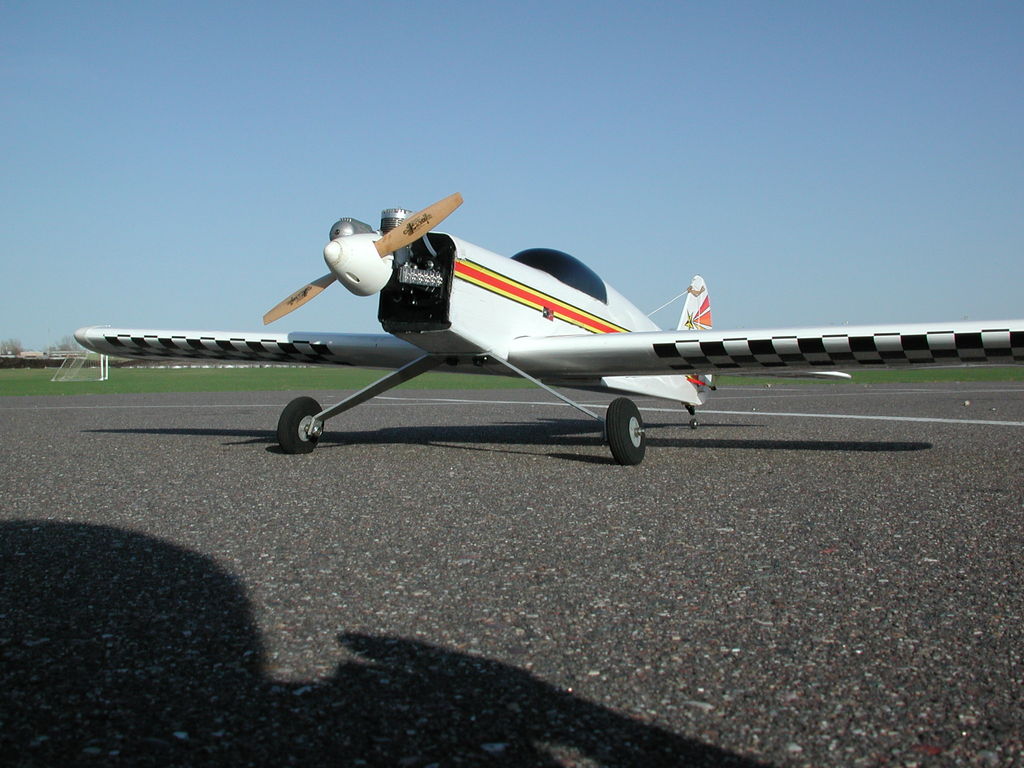 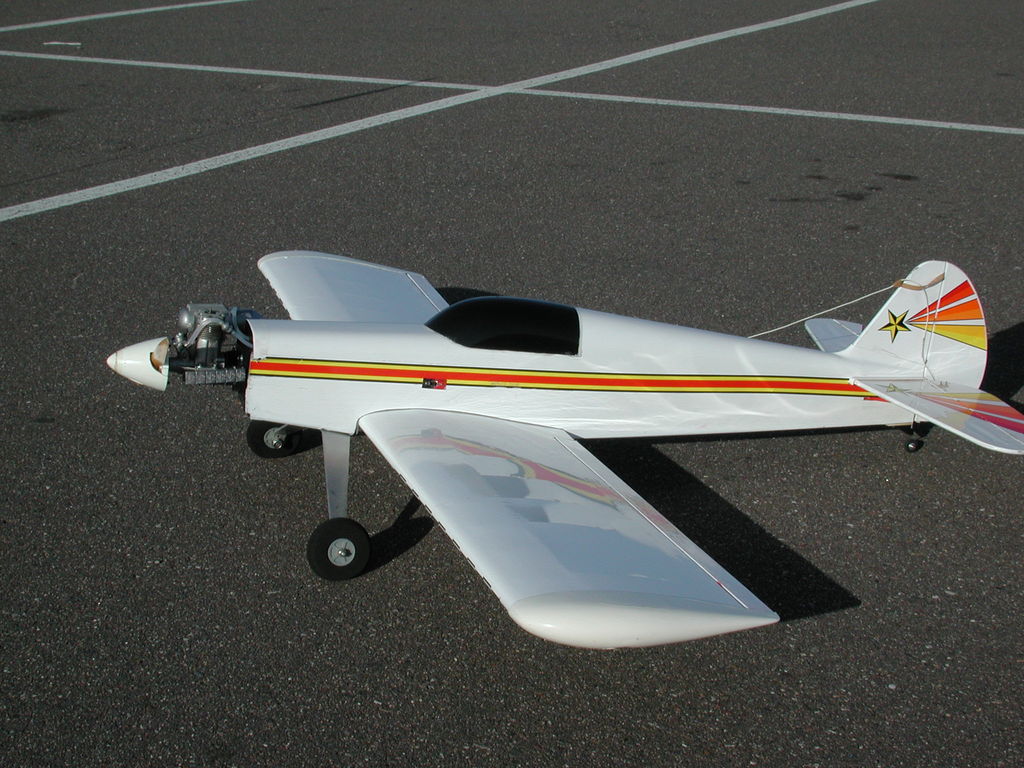 SS40-2 My wife and daughter came out to witness the maiden (for me) flights. Hoping for the thrill of victory, but expecting the agony of defeat. 🙂 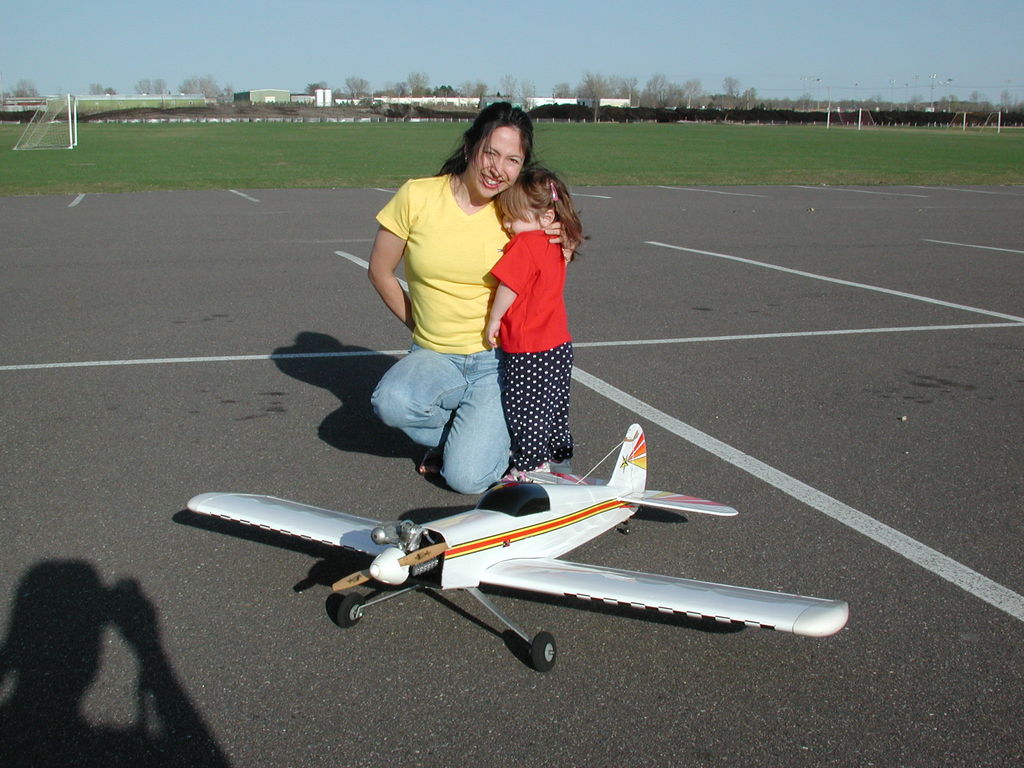 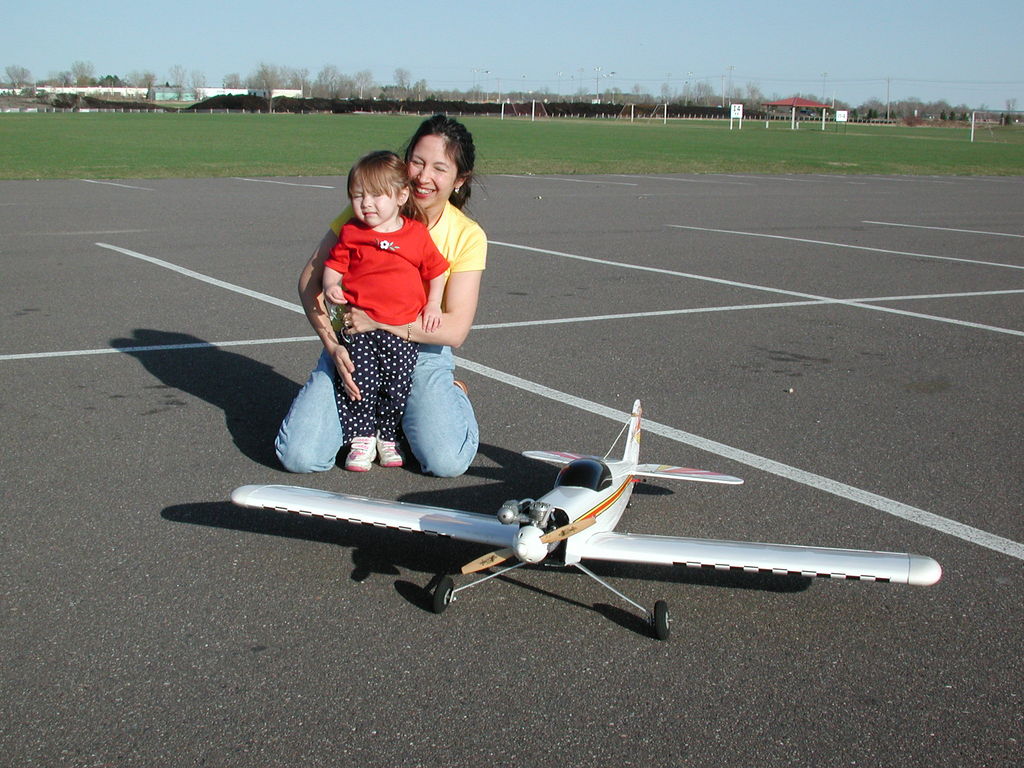 SS40-4 I flew the aircraft for the first time on Tuesday, April 22, 2003. I was somewhat apprehensive because this would be my first tail dragger, and first low wing aircraft. But I figured how hard could it be, right? But I brought along my bushel basket just in case.

It turns out my nervousness was completely unjustified. This is a wonderful flying aircraft. The take off run tracked straighter than any tricycle gear aircraft I’ve ever flown. Just hit full throttle and don’t mess with anything. It tracks along the ground like it’s on rails. With a little up trim, it will gently rise off the ground on it’s own and head skyward … it’s about as easy to take as a trainer. (You can mess with the rudder on take off if you want to make it look like it’s a handful, but that is optional.) 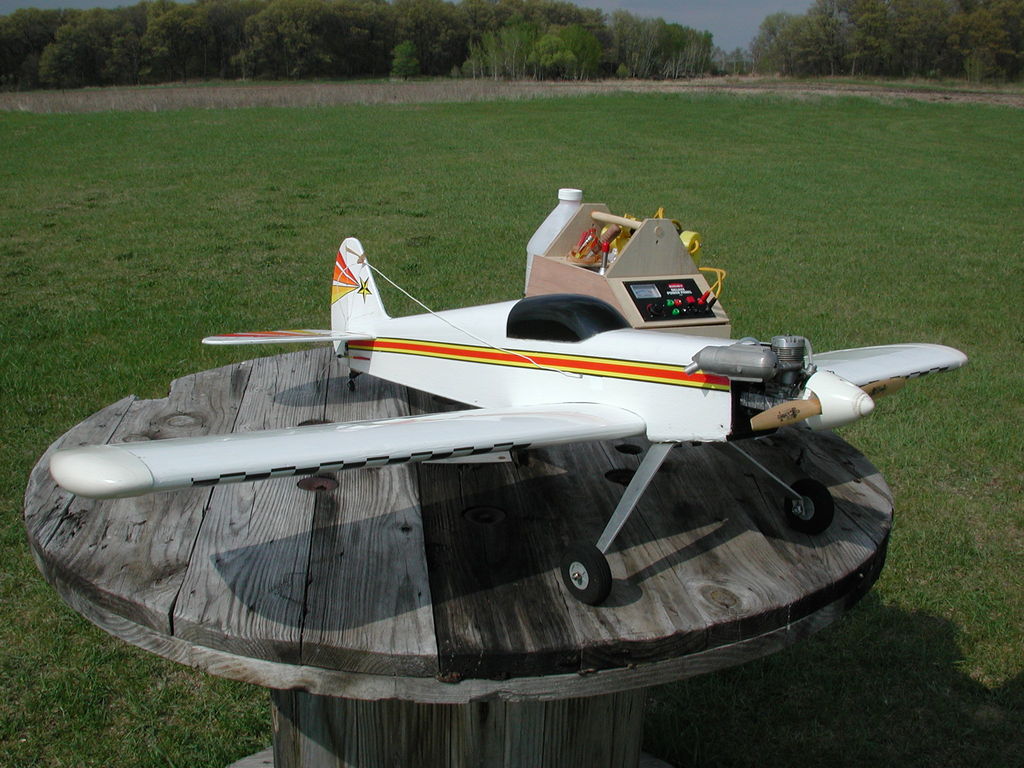 SS40-5 She’s also a beauty in the air … very stable and she “flies like she’s on rails.” She’s not as fast as I was dreading (which was kind of welcome.) Full throttle, she flies at a manageable speed.

I was worried about stall behavior though, so I tried a few stalls with plenty of altitude. Look out, this thing drops altitude fast when you stall it and if you hold a lot of elevator you can hold the stall longer than you have altitude. But center the elevator and she flies right out of danger. I’ve heard of people stalling these sorts of planes on final approach and that’s something you definitely want to avoid… especially on that last low slow turn.

So for my landings I trimmed back (nose-up) a little on the elevator to slow the aircraft down and tried to resist the urge to pull back on the stick. I added some throttle through the turn to base and final to make sure I kept the speed up (I am getting a lot of nose drop in turns … maybe nose heavy with fuel?) and then coasted in. Update: I found I have much better luck if I push my down wind leg out further from myself so I can make a much wider/gentler turn to base and final. With my sweet stick and with a trainer you can really wind up a tight 180 and be all lined up for the final approach. However with this higher performance aircraft things work a lot better if you make wider gentler turns on final … less nose drop, less risk of a stall, and everything works out a lot smoother. Today the sun was in exactly the wrong place for my first landing approaches so I had to duck “under” it and fly my approach much lower and flatter than I would have liked to, and remember to keep my speed up, etc. etc. This resulted in some bouncing and long roll outs, but nothing major. The successful completion of my landing was never in doubt (at least not by me.) 🙂

All in all this is a very sweet aircraft. I’m not sure I’d recommend it for a 2nd aircraft — but definitely a 3rd for after you’ve mastered something along the lines of a “stik”. Some people insist that all R/C modelers should have at least one stik. I think I will now insist that all R/C modelers have at least one Super Sportster. AWESOME AIRPLANE!!!! I definitely would recommend this to anyone looking for a fun, great flying airplane.

The glue seal around the canopy began to peel away so I had to rip that off and reattach it.

The main landing gear also needs to be addressed. The stock main gear is in two pieces with each wheel mounted individual under it’s respective wing, but this aircraft has a more generic one-piece aluminum main gear mounted just forward of the wing. Unfortunately it doesn’t appear that the person who made this modification, took any extra steps to beef up that area of the fuselage, so the mounting screws are just going into weak balsa. I need to beef that up a bit before my next flight because the main gear has gone all wobbly.

The other remaining issue is that I’m not getting full aileron throw. I think the aileron linkage is hitting the fuselage inside and limiting the travel. I may need to hack out a bit more of the wing mounting plate inside to give better clearance … that’s something I definitely need to address before the next flight.

Finally, the engine get’s a little dodgy when I pull inverted g’s (i.e. in an outside loop.) I’m not sure what’s going on there, but the clunk in the tank seems to be free to move and doesn’t seem to be getting hung up on anything. There’s something a little dodgy with the engine anyway … it has a small leak in the carburetor or needle valve assembly some place and seeps fuel or draws air depending on the context. Otherwise the engine runs good, so I need to keep my eyes open for a cheap OS 40 FP carburetor.

Ok, just for fun, I have converted my “Super Sportster” into a “Super Splashter,” or should I say “Super Floatster”, or maybe “Super Sploatster”? Hopefully not a “Super Splatster.” 🙂 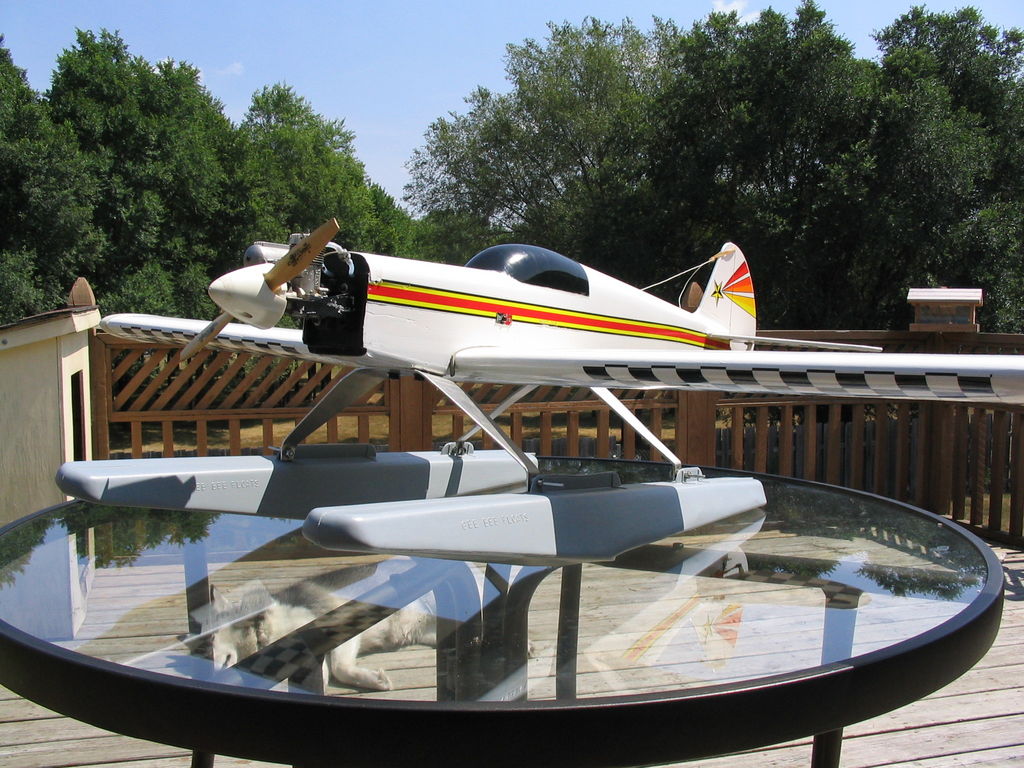 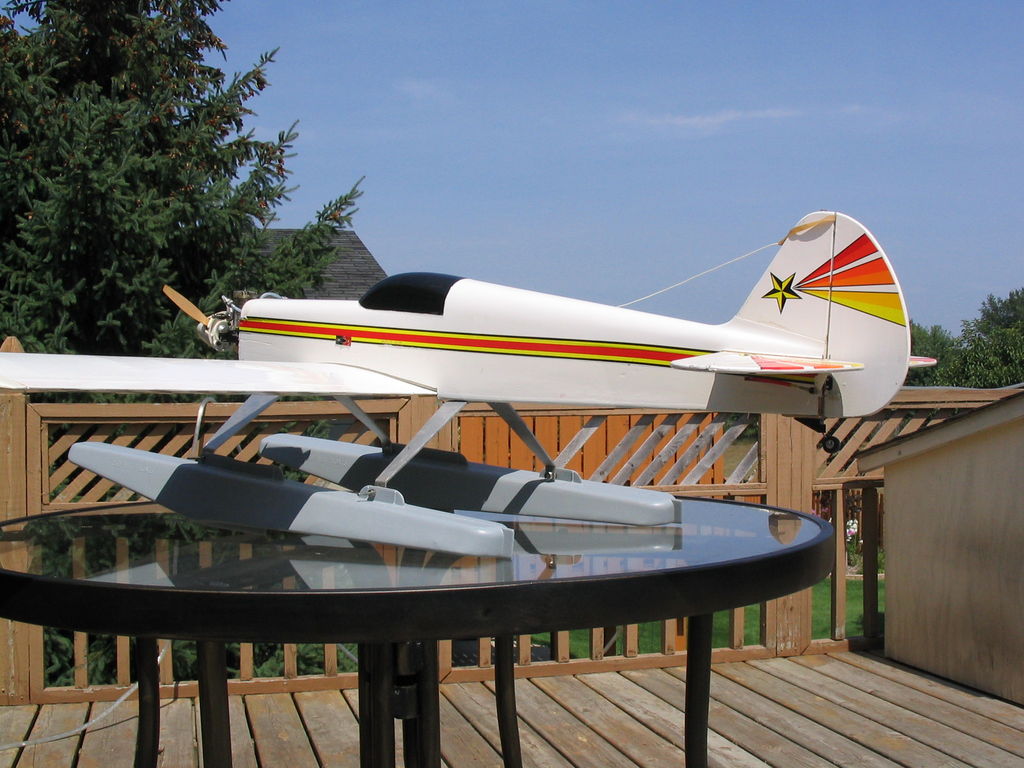 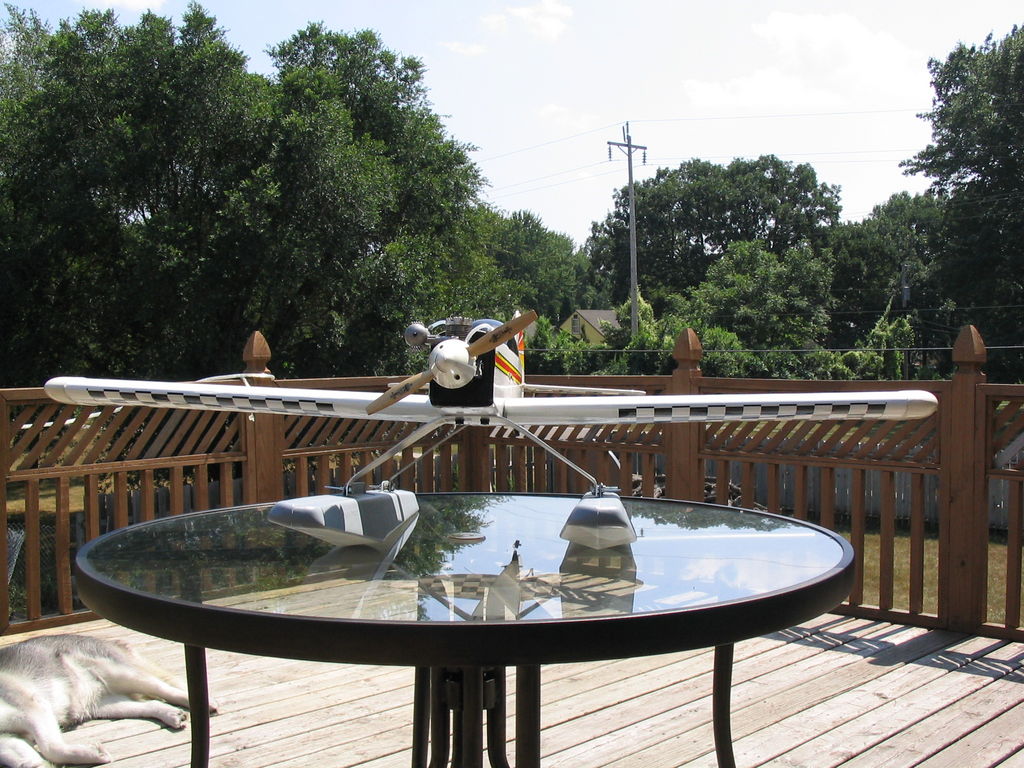 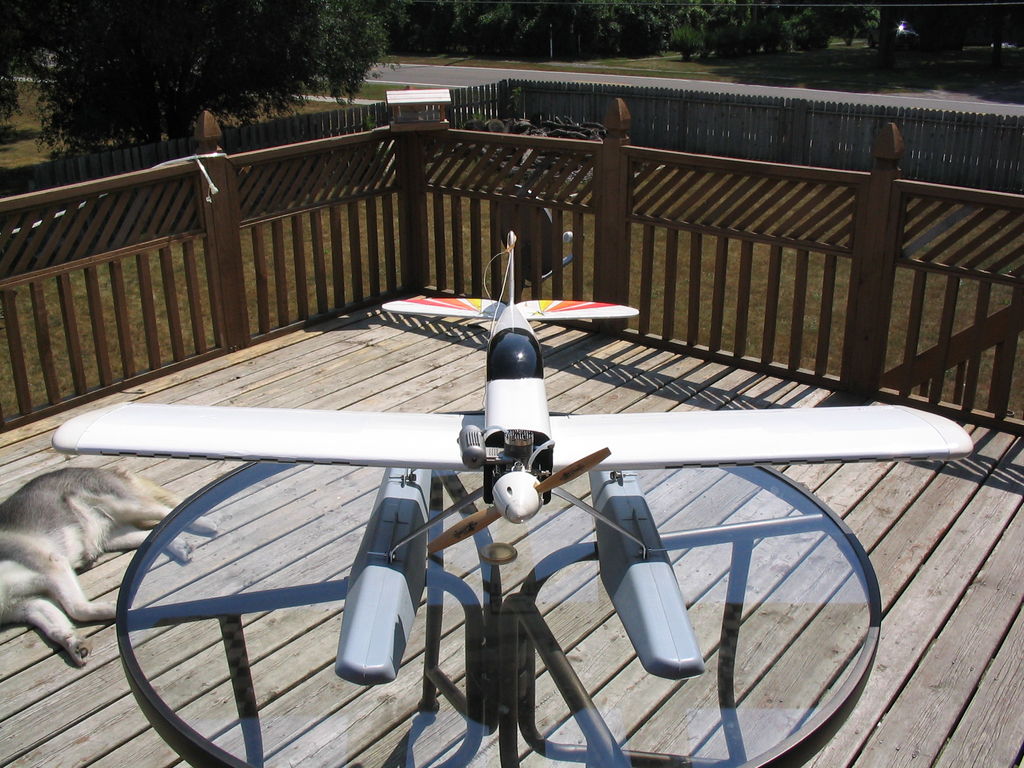 IMG_0180 I haven’t tried flying it yet … maybe this coming weekend.

Pictures from my failed attempt to get airborne off floats. But we still had a lot of fun. 🙂 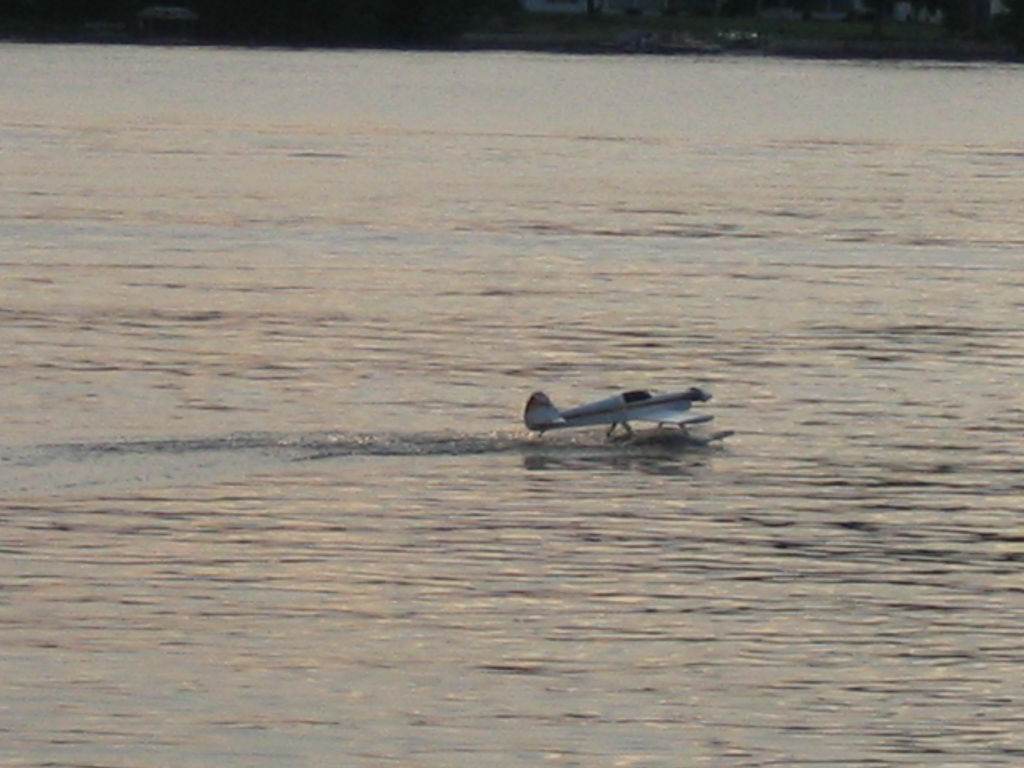 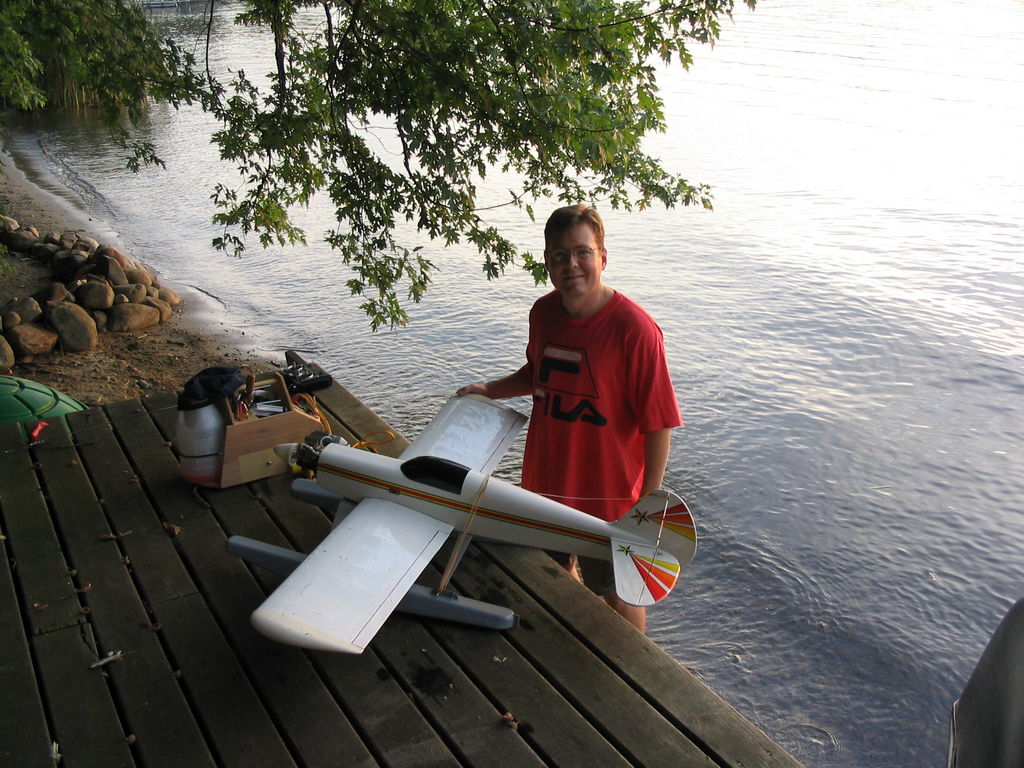 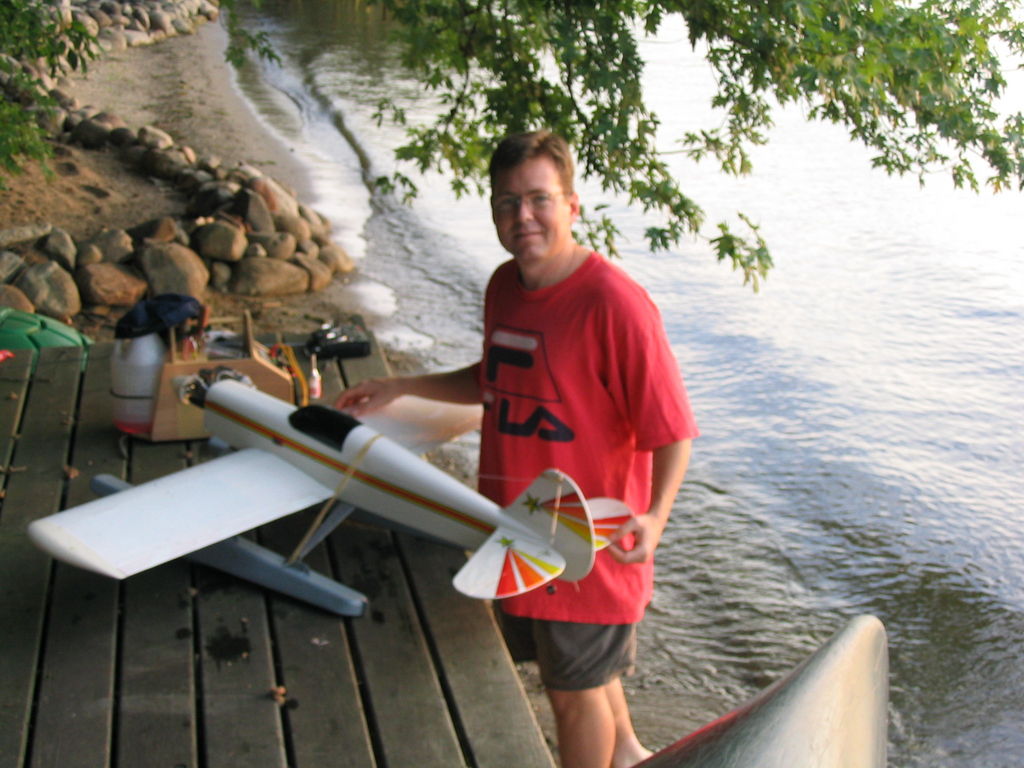 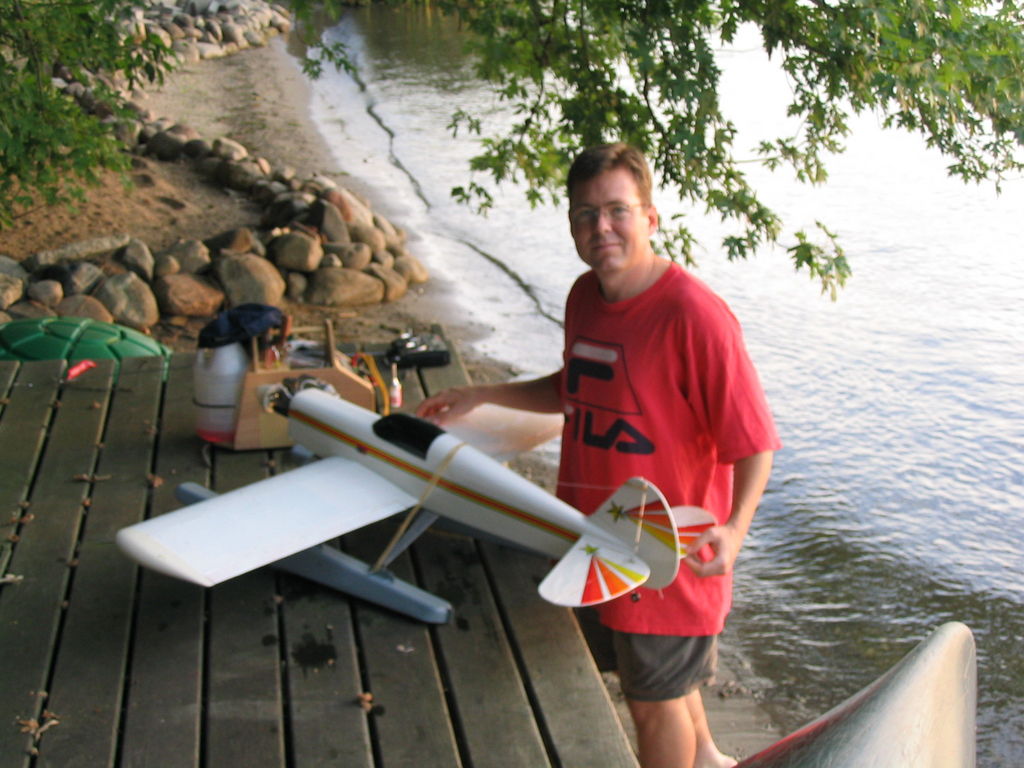 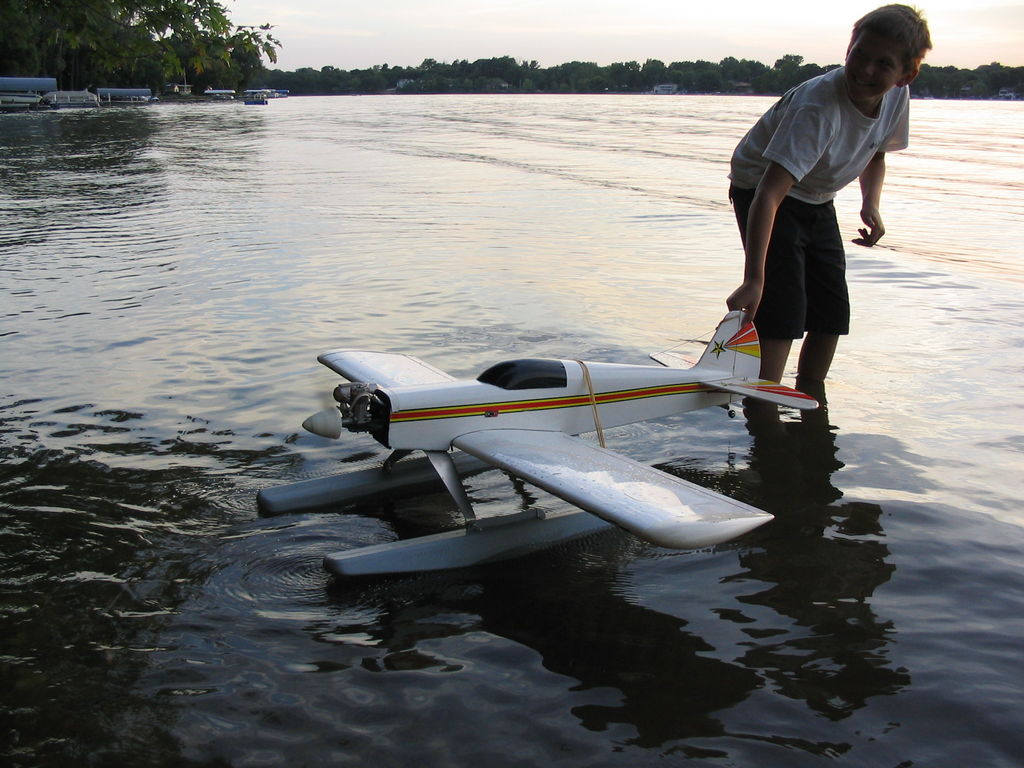 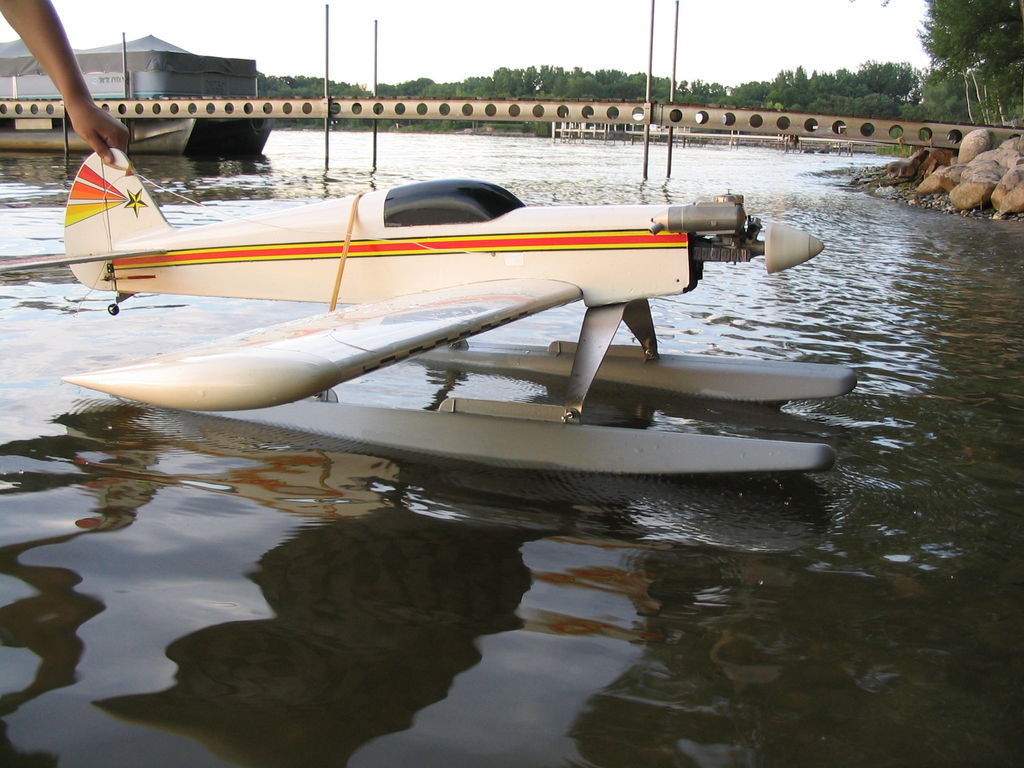 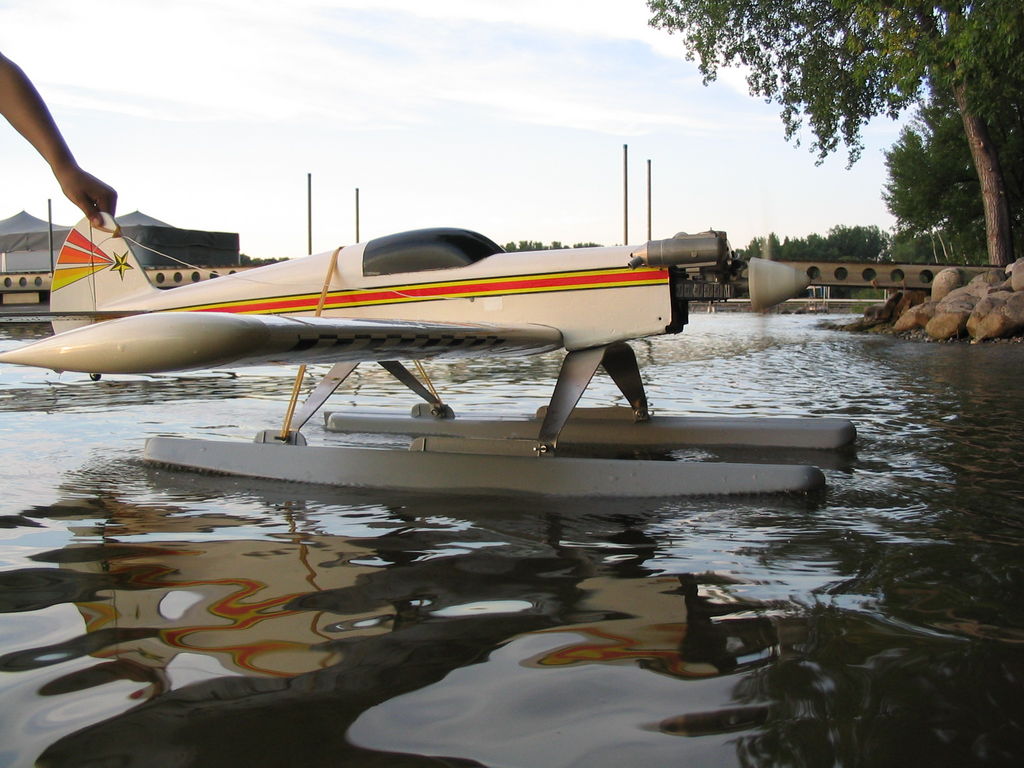 Having flown this aircraft about all I wanted to fly it, and needing space for new projects, I opted to give it away to a good home. Hopefully the next owner can have as much fun with it as I did.