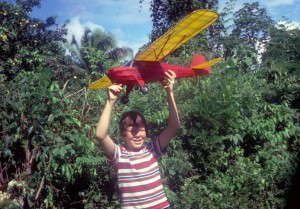 Here is a picture of me in jr. high in my front yard in Peru.  I’m holding a Comet Taylorcraft model.  Pretty awesome huh!?!  (The plane I’m referring to.) 🙂

I don’t really have any other pictures to share, but growing up I put together quite a few plastic models, Guillows balsa and tissue models, and the occasional Estes rocket. These have all been lost or destroyed along the way … but they were a lot of fun to assemble and play with at the time, and led the way to the bigger and more expensive toys I play with now. 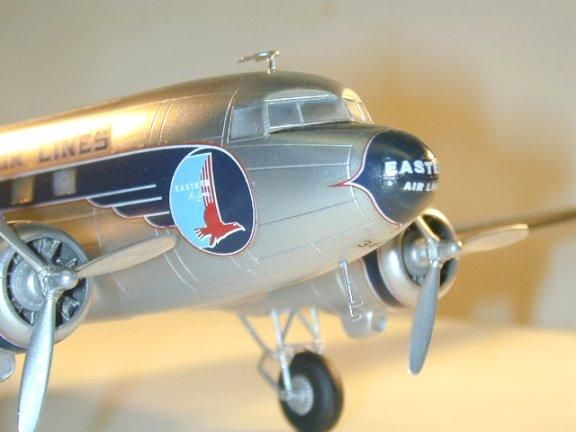 This is a picture I found on the web that is similar to the first plastic model my dad built for me.I remember the first model my dad helped me put together (well mostly put together himself for me and my little brother to play with.) That was a DC3 and I thought it was pretty much the coolest thing I had ever seen.

I should also mention “Uncle Bart” who used to fly his many R/C planes in the late afternoon when I was growing up in Peru. It didn’t matter what we were in the middle of doing after school, if we hear a little model engine buzzing around in the sky, my friends and I would jump up and run to the small airstrip to watch him fly (after we finished gasping and wheezing from our sprint.) This is where I was first introduced to the wonderful hobby of R/C aircraft.

This is also where I witnessed some really cool crashes. When I was a kid and it was someone else’s airplane, the crashes were the coolest part. Once I started building and flying my own airplanes, the crashes became the worst part. There is always an attrition rate with toys, but like anything, keeping your equipment in tip-top shape, repairing any problems that start to develop, and keeping your batteries well charged can minimize potential problems. (But no one is perfect!)