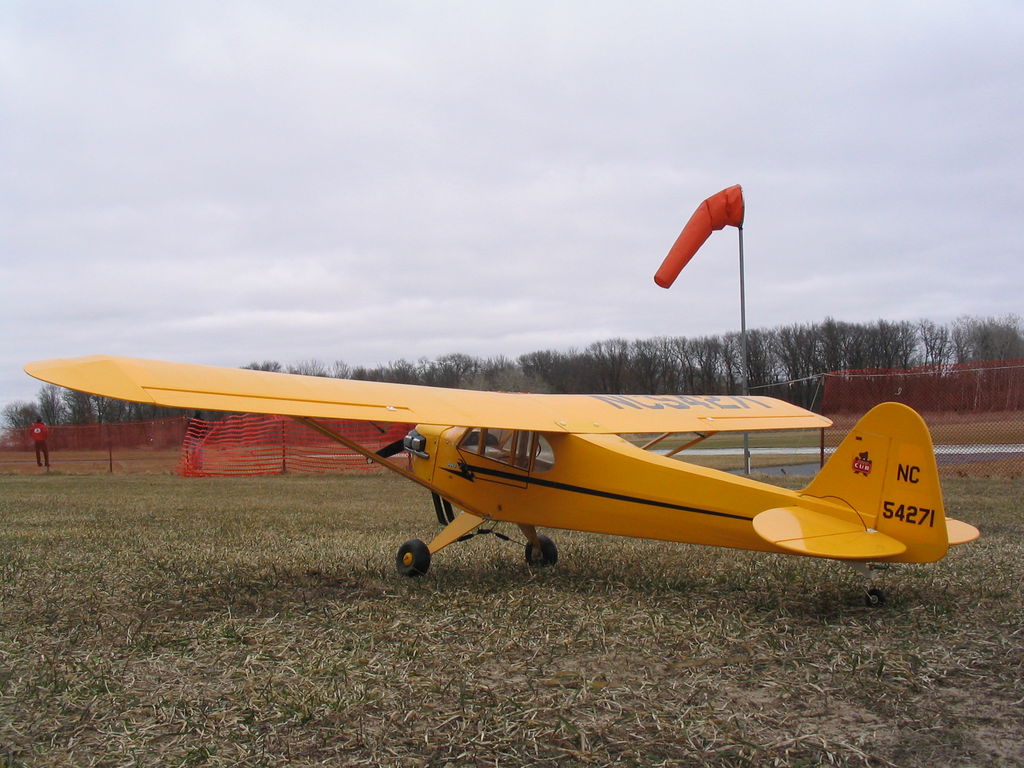 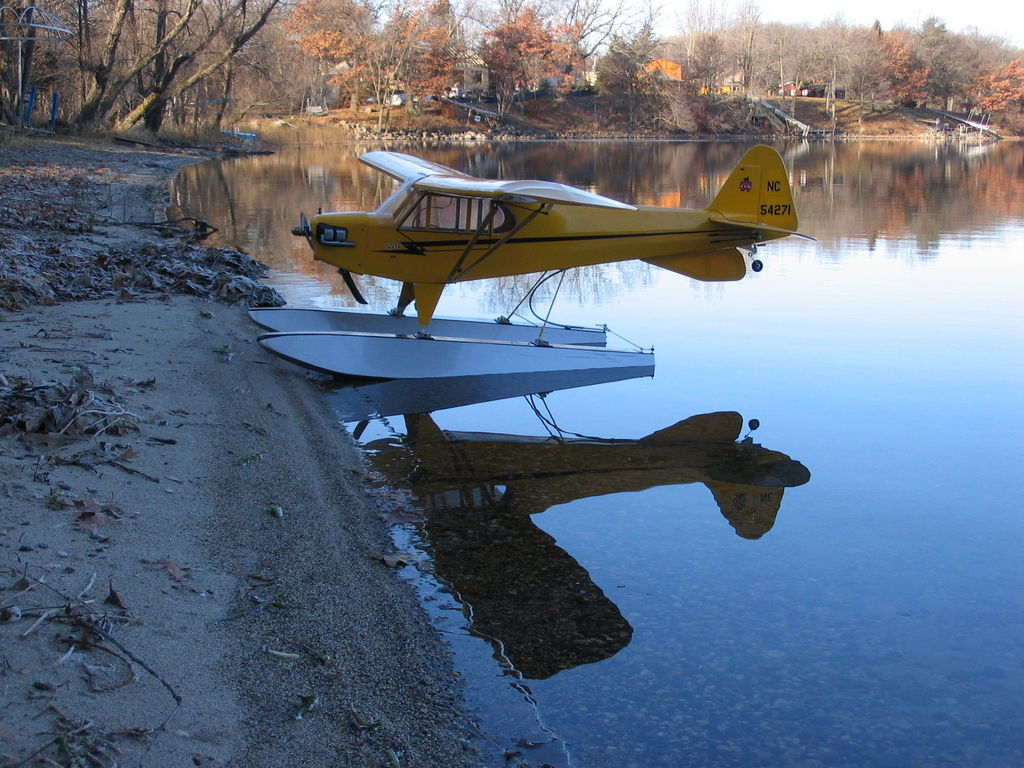 This turned out to be a deal I literally could not refuse. It was listed as ‘local pickup only’ on ebay and I ended up being the only bidder. After church on sunday, I burned rubber down to Madison to pick it up. There was a major winter storm bearing down on us and I wanted to get back before things got too bad. The last hour or two of the drive home saw a mix of precipitation, ice, snow, rain, but the roads stayed good all the way home. We ended up getting 8-10 inches of wet, heavy snow by noon the next day.

Here is the history of the airplane as best as I know.

Originally this aircraft was assembled by an older gentlemen. He bought the Carl Goldberg Super Floats to go along with it and really did a nice job of assembling everything, and added a few nice touches along the way. Unfortunately he passed away before he had a chance to fly it.

This gentleman’s son worked with a guy who did R/C so he sold off his father’s fleet to him. This person flew it once (off water with the floats.) However, it turned out to not be his cup of tea and needed to clear some space in his shop, so he put it up for sale on ebay.

As far as I know, the aircraft and engine have only one flight on them. The covering has a few wrinkles in places that are typical for ARF’s and typical for the plastic type covering. I need to see if they will shrink out. Other than that, the airplane is in pristine and brand new condition.

I did a few maintenance tasks. 1. I replaced the wing servos. Something is drawing way more current than it should and this is my first stab at figureing that out. 2. I added some lead to the tips of the floats to help balance the aircraft with the floats on. 3. I still need to move the rear float mount to lower the tail relative to the rear of the floats. 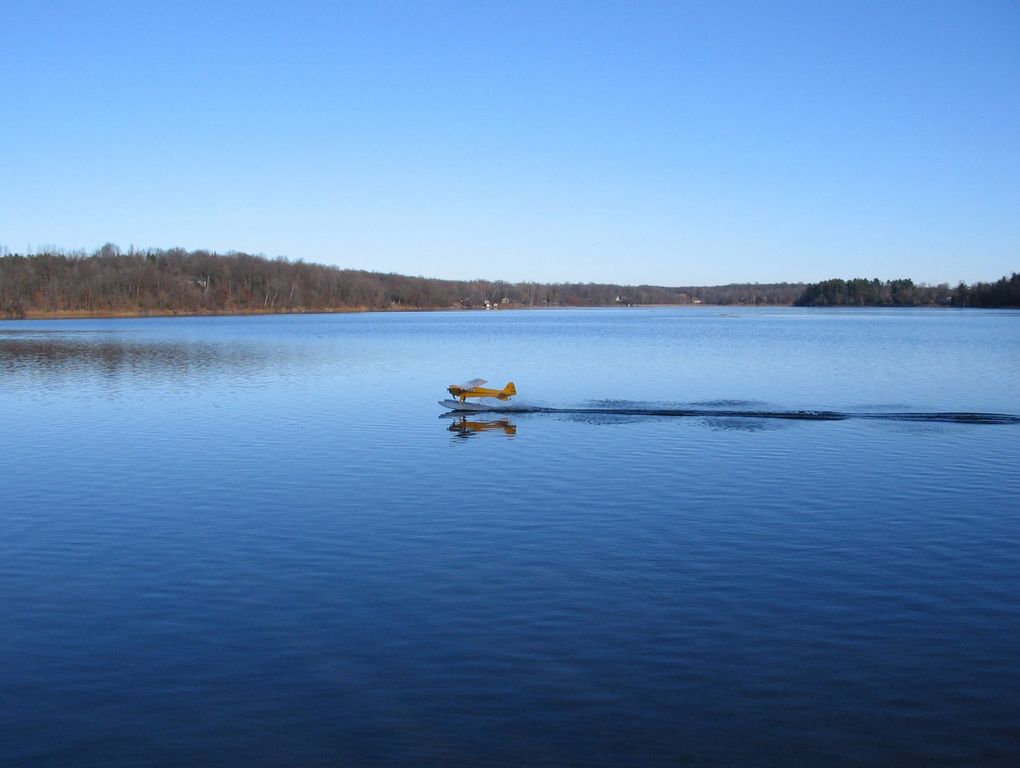 I finally got organized enough to get my Cub up to my parent’s lake. There is a small thin sheet of ice forming at the middle of the lake so this is most likely my last chance to fly off water this year.  Check out how sweet the cub looks flying off water:

Finished float installation — needed another control horn on opposite side of rudder to drive the water rudders. I am ready for some water flying!

I cycled my battery after the chirper went off yesterday. I still had 2 hours of time at the accelerated discharge rate, so the battery was good. I plugged in a voltwatch unit and that indicates full charge even after the chirper kicks in. So I’m confident I have a bad chirper, not a bad battery or an accelerated battery drain problem.

It might be time to rig up the old floats for this bird.

I had planned a long late afternoon and evening of relaxing flying. Unfortunately my onboard battery minder started chirping after the first 1/4 tank on the first flight. 🙁 Needless to say I packed it up and called it a day.

I have no idea. It’s a brand new battery, it’s been cycled a couple times with an accucycle and showed solid numbers. It performed well the first time I went out to fly, but was fading fast today after a good solid charge. I don’t know if I should debug the problem or get rid of this older radio equipment and just buy a new flight pack.

Weather: middle 40’s, light winds ranging from E to S, overcast. I had a bit of trouble getting the engine tuned up, and had to richen the idle mixture a bit, but having done that, the engine ran quite well. I had several succesful flights and started to get the hang of cub flying by the end of the day. One thing is for certain, this is no R/C trainer.

It is pretty easy to get too slow and with a bit too much up elevator you stall and immediately enter a snap roll. I did this once on the back side of a loop. I got too slow over the top and due to my low altitude, I tried to tighten up the backside on the way down by feeding in some additional elevator. But she snapped hard on me. I released the elevator and got some speed and then pulled back again to avoid the ground and she started to snap again. But I somehow managed to find some sort of middle ground with the elevator to keep pulling out of the dive while maintaining just enough aileron authority to somehow save it. Both wing tips were literally inches from the ground at various points in the manuever and I was still flying right on the ragged edge of the stall. I was one tremble short of another full snap roll. The spectators claimed that ground effect saved me. 🙂 Somehow in the end I was back flying with no vegetation in the gear or wing tips. WHEW!

Lesson of the day: A cub needs it’s respect, it needs finess. You don’t go horsing it around the sky at any speed. One mistake can burn you.

But the good news is that with my new found respect, the cub is a great and gentle flyer. You just need to manage the rudder and the elevator and the throttle with finess and don’t do anything stupid.