Hobby Lobby recently introduced a neat P-47 warbird model.  It has a 40″ wing span, 4-channel flight control, retractable landing gear, and comes receiver ready.  It includes servos, motor, speed control, and even a suitable battery.  All you have to do is some basic assembly, install your receiver, and you are pretty much ready to go.

Here are the tail surfaces as they come out of the box.  Everything is pre-hinged. 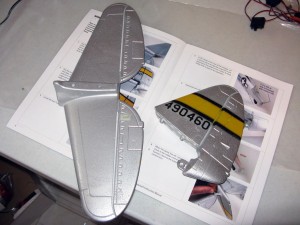 Here is the fuselage as it comes.  The motor and speed controller are already installed.  Servos and linkages are installed.  Even the cowl comes pre-installed: 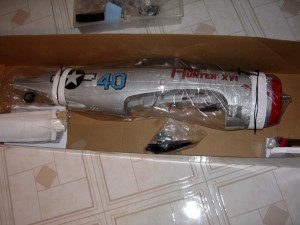 Here is the wing.  As you can see, the two halves are already attached.  The landing gear and retract system is already installed.  The servos and linkages are also installed and the control surfaces are hinged and attached.  The wing flaps are not operable by default, but I noticed there are servo mounts molded into the wing and it would be a 30 second job to cut the wing flaps loose and hinge them.  So if anyone really wanted to add flaps for additional realism, it should be a straightforward mod.  The aircraft definitely doesn’t need them though … it slows way up if you want it to and flies very stably at slow speeds. 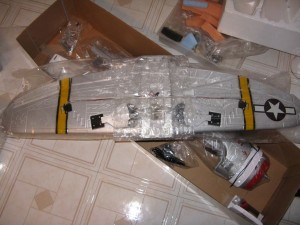 Here is a close up of the machine guns on one side.  There are tons of little details built into this aircraft! 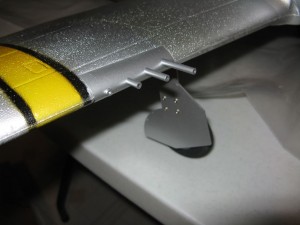 The prop was a neat surprise.  It’s an operational, scale, 4 bladed prop.  The prop tips are painted yellow and it really looks neat when it is stopped and when it is spinning.  It includes a scale prop hub and the final result looks really sharp!  I’m sure the prop is not the most efficent choice, but it looks great, and works great so I’ll run with it. 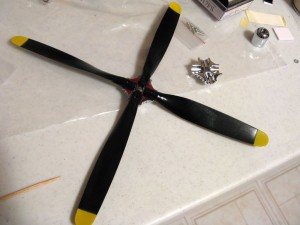 After hardly any effort or time, I ran out of things to do and the aircraft was done.  It’s midnight though so I took it out in my driveway for a pre-maiden photo shoot.  She really looks sweet. 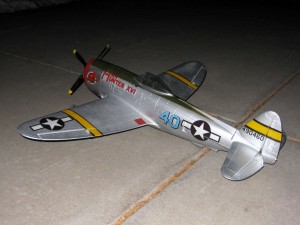 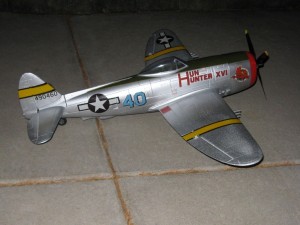 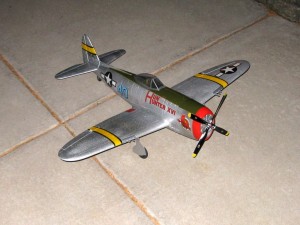 Here is a good view of the business end.  You can see the scale prop and the retract system.  Very nice! 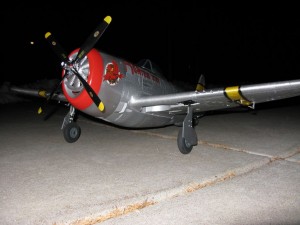 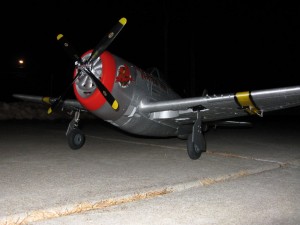 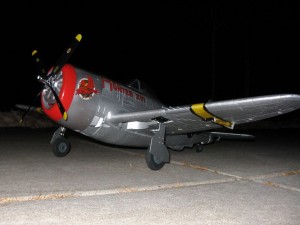 The next day after I finished the airplane we got a giant snow storm here in Minnesota.  Blast!  I figured it was still late fall, wait a few days and this first snow fall of the season would melt.  But unfortunately, mother nature had other plans for us.  The temperatures dropped, more snow came, and more, and more.  The RC club field was buried for the winter. 🙁

Fast forward to April.  The snow has finally mostly melted and the road to the field has dried out enough to be passable with normal street vehicles.

I snuck out to the flying field for an early lunch break.  The winds were relatively light @ 5-10 mph.  But they were at a 45 degree cross wind though which was the only minor complication.

Here are some pictures before the first flight.  I also have a battle tested Hobby Lobby MiG-15 that uses pretty much the same battery so I brought it out as my “backup” airplane in case I found a problem with the P-47 and couldn’t fly it.  I hate wasted trips to the flying field!

She’s just as pretty in the grass in the morning as in my driveway at midnight. 🙂 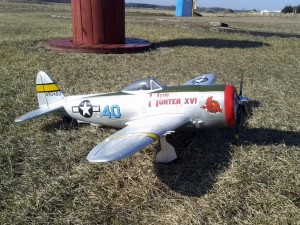 Maidening a new airplane can get the butterflies going, so I always try to tell myself that these things are designed to fly.  They want to fly!  It will fly great!  And that’s the truth.  I had to dial in several clicks of right aileron and a couple clicks of up elevator and I was grooving around the sky.  The scale prop doesn’t offer blazing top end speed, but it’s solid and gives good power.  There is plenty of HP to climb very agressively.

I’m especially excited about this P-47 because it is my very first RC model airplane with retractable landing gear.  A WW-II warbird really needs retractable gear.  It just doesn’t look right flying around with the gear down, and if you build it with no gear at all, then you have to hand launch and belly it it.  The retracts worked great with two lessons learned:

I read online that this design has a tendency to nose over and guys were busting up their scale props (and then complaining because they were out of stock.)  So in my test flights I was very careful to hold up elevator at the start of the take off run and touch down with a heavy dose of elevator dialed in.  By the way, this P-47 has awesome slow flight characteristics.  If you are careful to bleed off your speed and flair at the right time, this thing totally slows down to a walk and drops in for a nice 3-point landing.  I need more practice, but on a nice light wind day, I think there’s potential for some really really sweet landings.

After my first battery was expired, I picked up the aircraft to walk back to the pits.  I noticed a crack developing in the wing foam on the bottom side of the wing, close to the wing root between the leading edge and the wheel well on the right side.  The spar was solid, but there was more flex there than I liked to see.  Bummer, done after one battery, but still happy with how things went.  I’ll file this under “shaking out the bugs”.  Hopefully a little glue will secure the foam and I won’t have any more problems.  It’s something to watch though. Update: the crack was a little more extensive than I first thought … it appears to be from landing, but I don’t recall banging it in real hard. Oh well, I glued it together and hopefully it will hold.