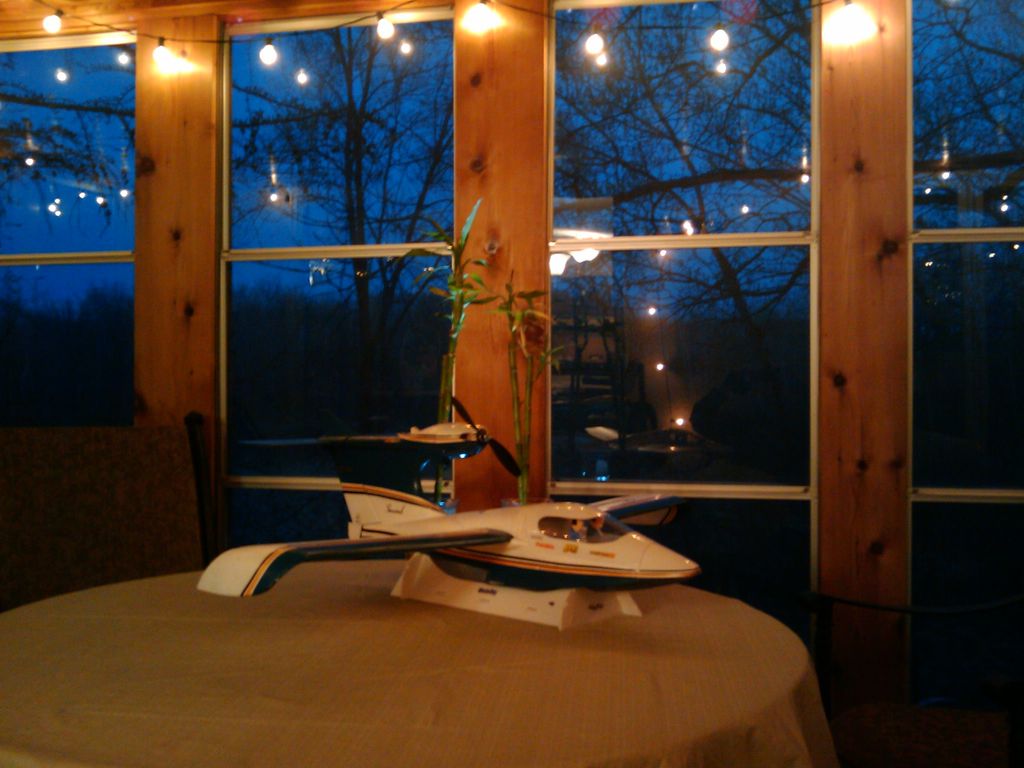 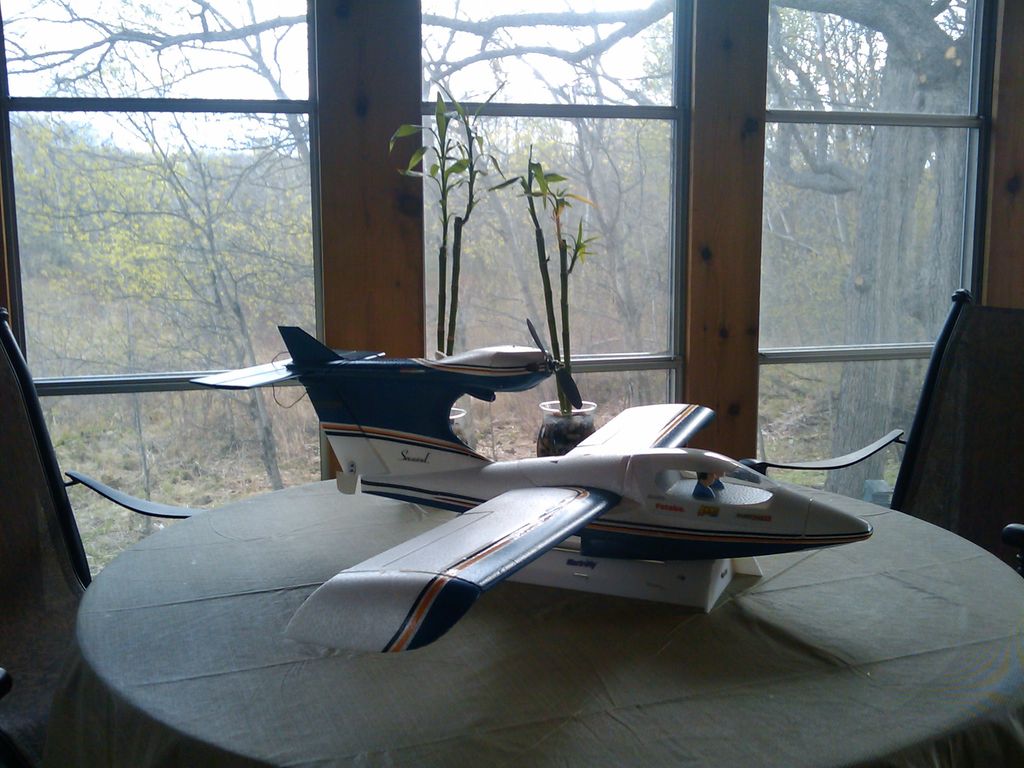 January 26, 2010: After taking a radio hit this summer and not doing anything with the airplane since then, I finally made my way to the hobby shop and purchased a 2.4Ghz receiver. The plan was to finally get around to checking the motor and speed controller and servos to make sure they survived the hard dunking. Then if everything else checked out, I would install this receiver and convert the airplane to 2.4Ghz. HoHopefully no more radio hits from that point on.

So now the plane has a 2.4Ghz receiver, everything checks out, should be already to fly again. Now I just need to wait for a day with lighter winds and I can walk down to the nearby lake and fly off the ice.

Summer, 2009: On a windy day this summer, after several take offs and landings, I took a hard radio hit on final approach at about 30′ above the water. This pushed full down elevator and nose dived straight into the water. I was expecting to go out and clean up foam bits from the water, but as I got closer, I realized the aircraft was entirely intact, just floating upside down. I pulled it out, yanked the battery, and set it aside for a thorough going over at some future date.

April 10, 2009: I took the girls down to the lake so that I could do a quick flight. The winds were 5-10mph, but more of a cross wind than I would have liked. It wasn’t a big deal except moments before touch down on my first landing attempt I caught a cross wind gust. I as *really* slow and almost ready to plop her in, but the left wing dipped, caught in the water and the airplane did a 1/8th cartwheel, nose into the water and the popped right back out. However, this popped off the mag-mount canopy and the entire fuselage filled with water. Dohhh! I’m going to start putting a bit of tape on the leading edge of the canopy from now on.

The end result thought was that I melted my speed controller, shorted out an expensive battery, and killed the elevator servo. I had an exact duplicate speed controller in my Rascal EP so I stoll that. I bought a replacement servo at the hobby shop. So now I just lack a flight battery. I’m going to order one soon, but need to spread out these costs a bit so the kids can eat. 🙂

April 25, 2009 Update: I got a new battery, borrowed a speed controller from another model, and replaced one servo. I just took her out for a test flight and we are back in business. She flies flawlessly, no worse for wear.

April 4, 2009: There was hardly a breath of wind this afternoon so I walked down to the lake again and flew out the battery. Here are a couple still shots in her natural habitat: 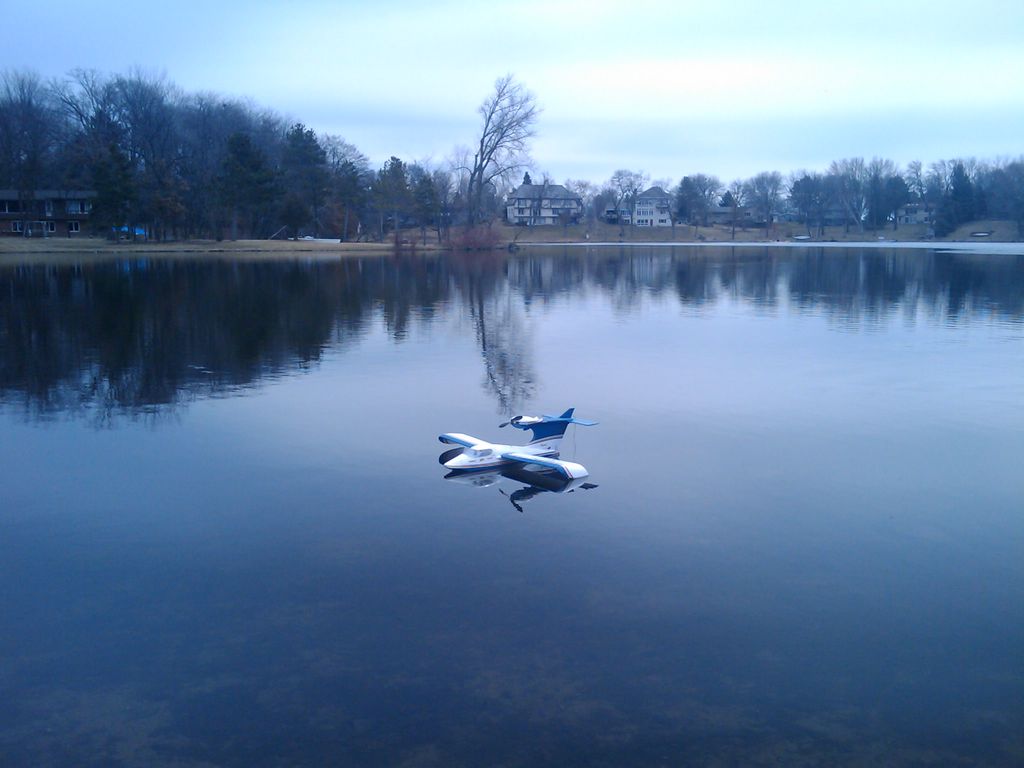 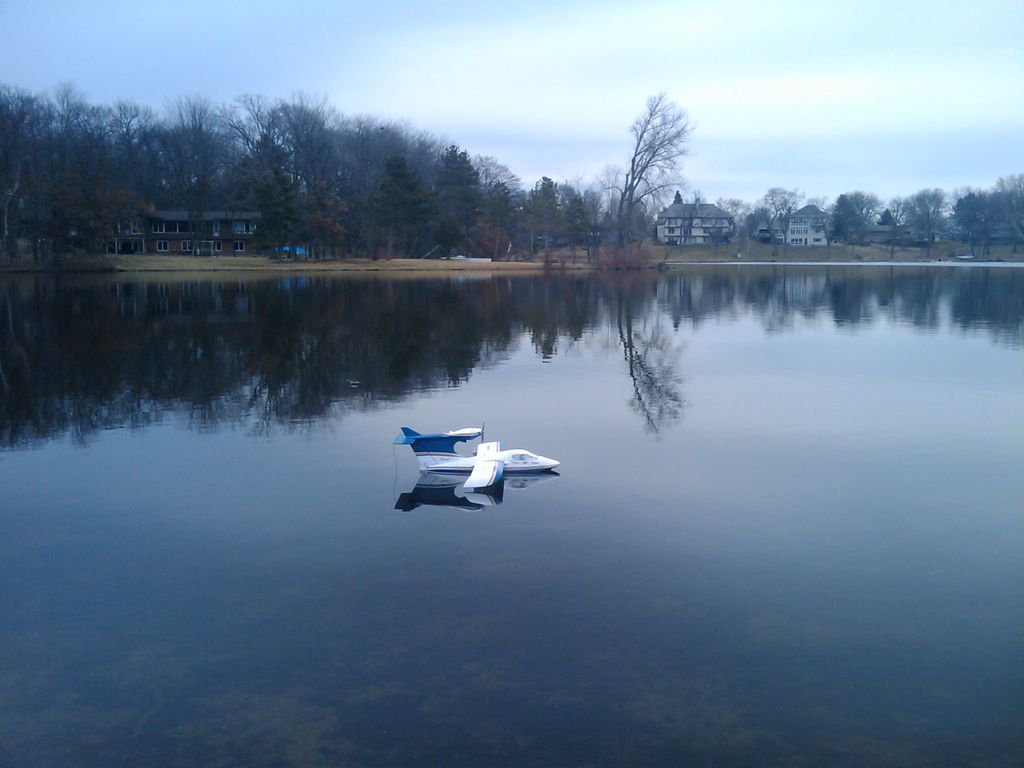 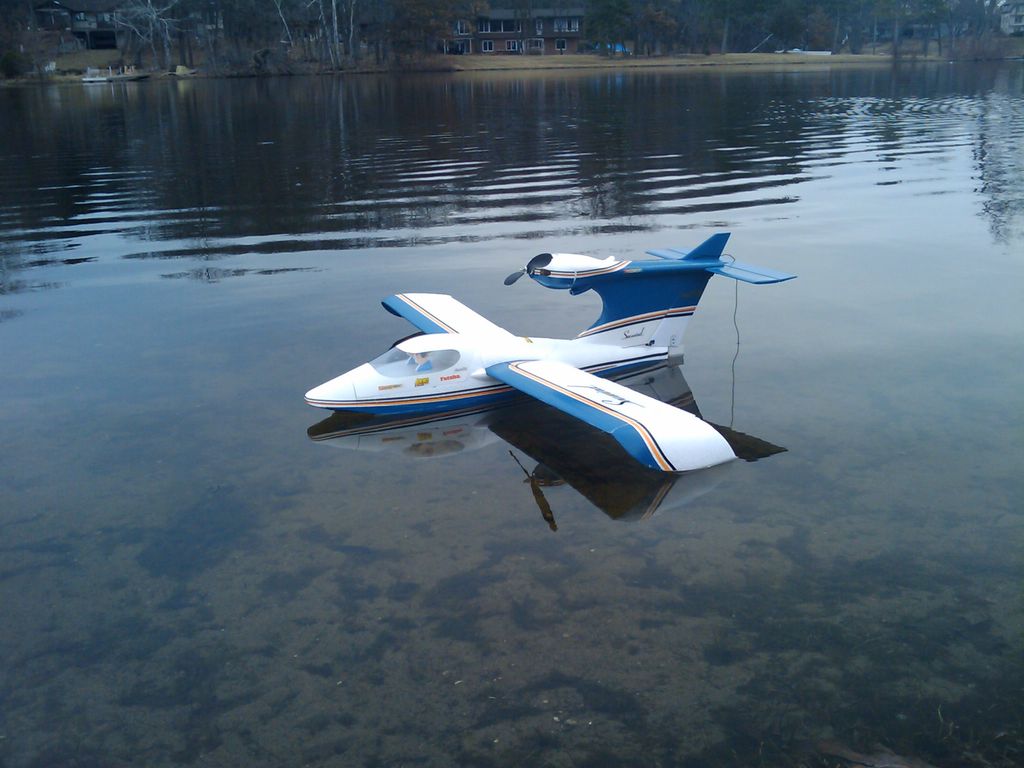 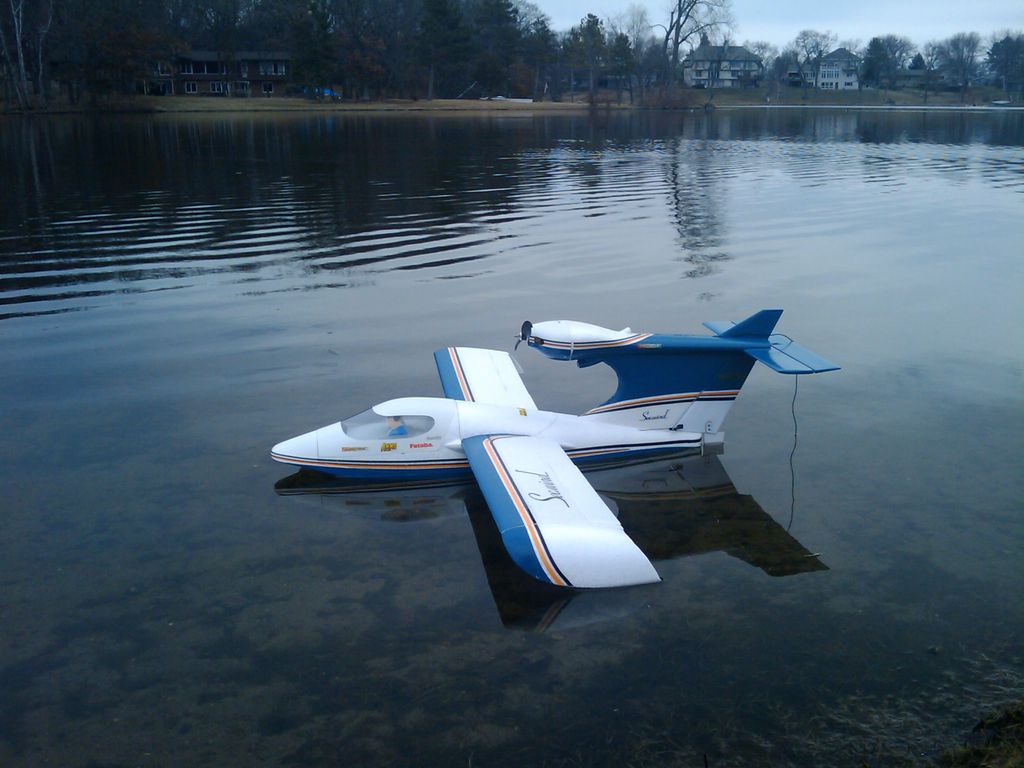 April 3, 2009: The ice is just about gone on the lake I live near (just one end still has coverage.) I walked down to the dock on my lunch break and did a couple short flights off real water. Everything worked well. Winds were probably close to 10 mph, but due to the size of the lake and the direction of the winds, the waves were relatively small. Everything worked great and take offs and landings were a non-event. The only thing I had a small amount of trouble with was controlling the direction of the water taxi when moving slow. The water rudder doesn’t extend down very much in the bobbing configuration, so you have to gun the throttle and get up some speed to have effective rudder control. That could be a problem in tight areas (around boats or a dock) especially if there is any wind to push you around. But not a big deal if you are planning ahead and allow plenty of room.

March 7, 2009: A couple short flights off the frozen grass at my club flying field. 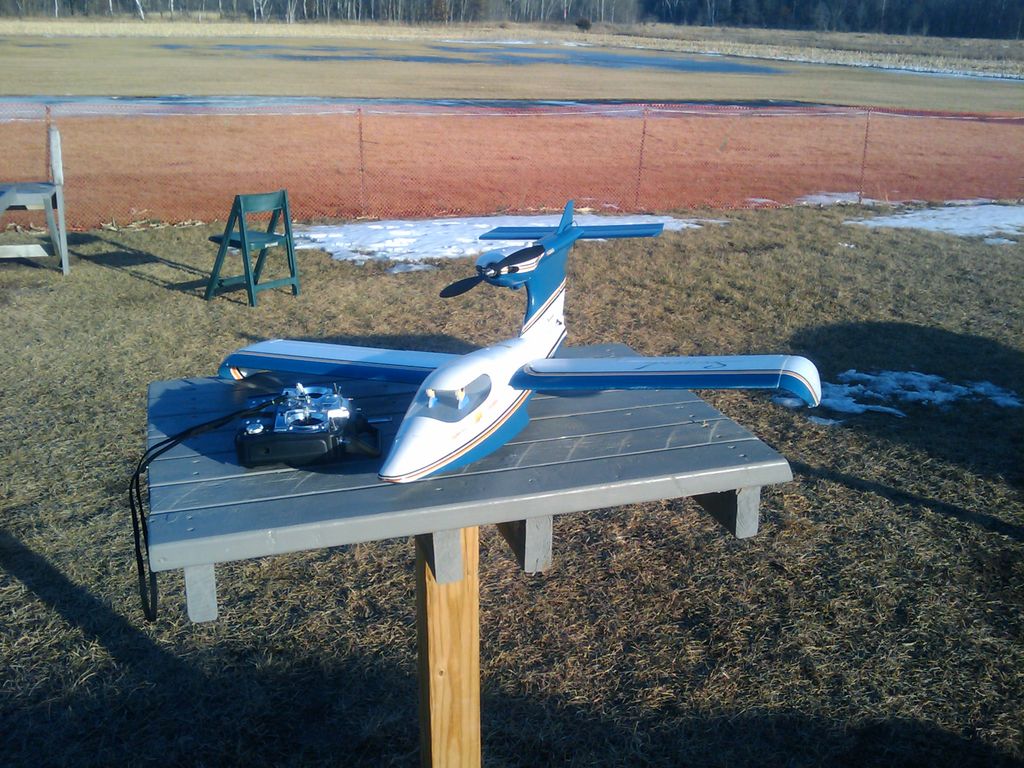 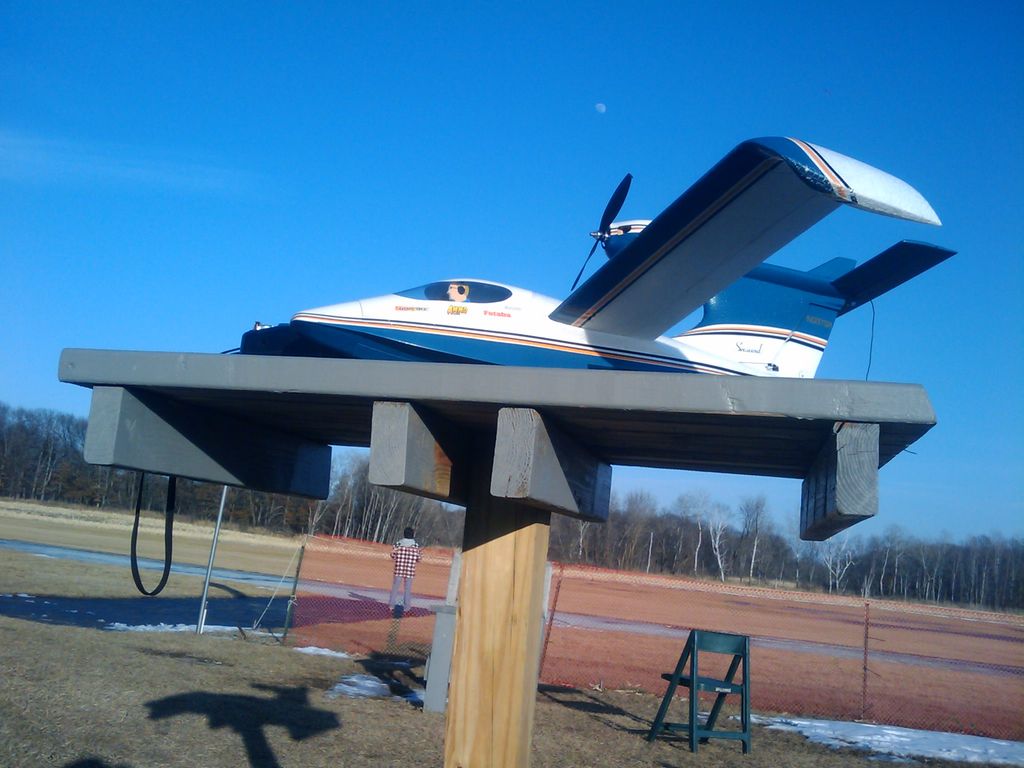 February 5, 2009: I took a quick lunch break, walked out onto a nearby frozen lake and maidened the Seawind. She flies very nice and seems to be a good all around sport flyer. She slows up nicely for landing, and will drop in with a nice steep decent. If you carefully flair, you can drop her into the water or snow at very little forward velocity.

The Seawind is a unique scale model with very nice lines. The model version is equally at home flying off snow, wet grass, or water. This is the Rx-R version which comes with motor, servos, and speed controller all preinstalled. There are still a few things left to do, but quite a bit is already done. The only major things I needed to add were my receiver and a flight battery. Here is how it looked coming out of the box. 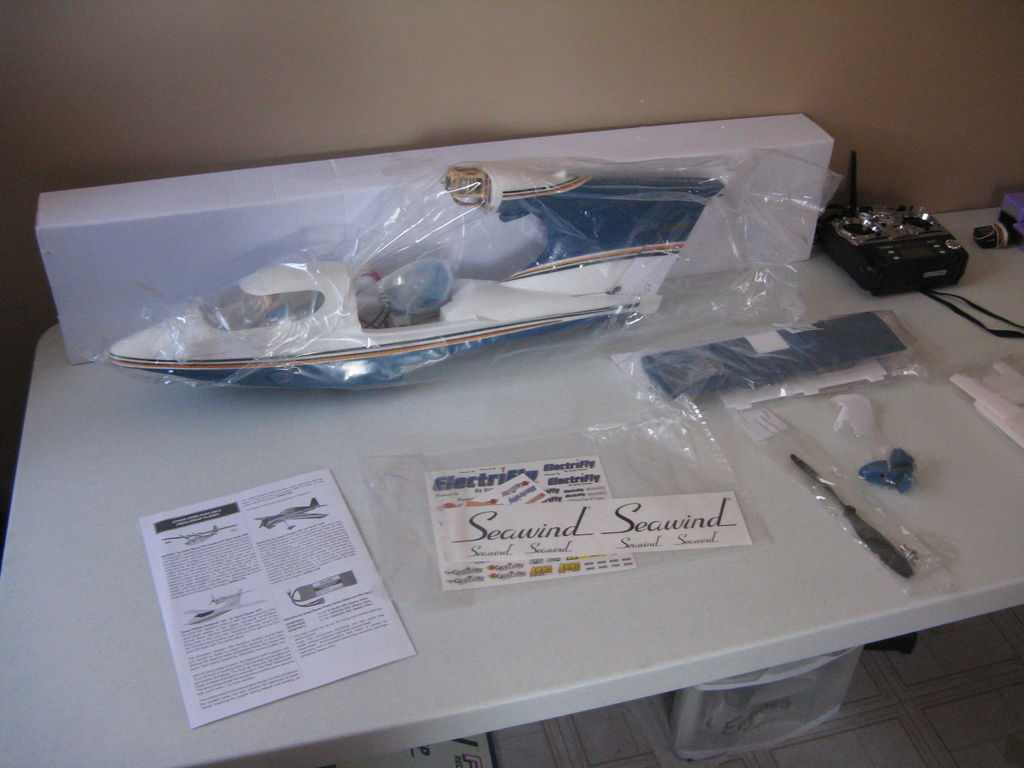 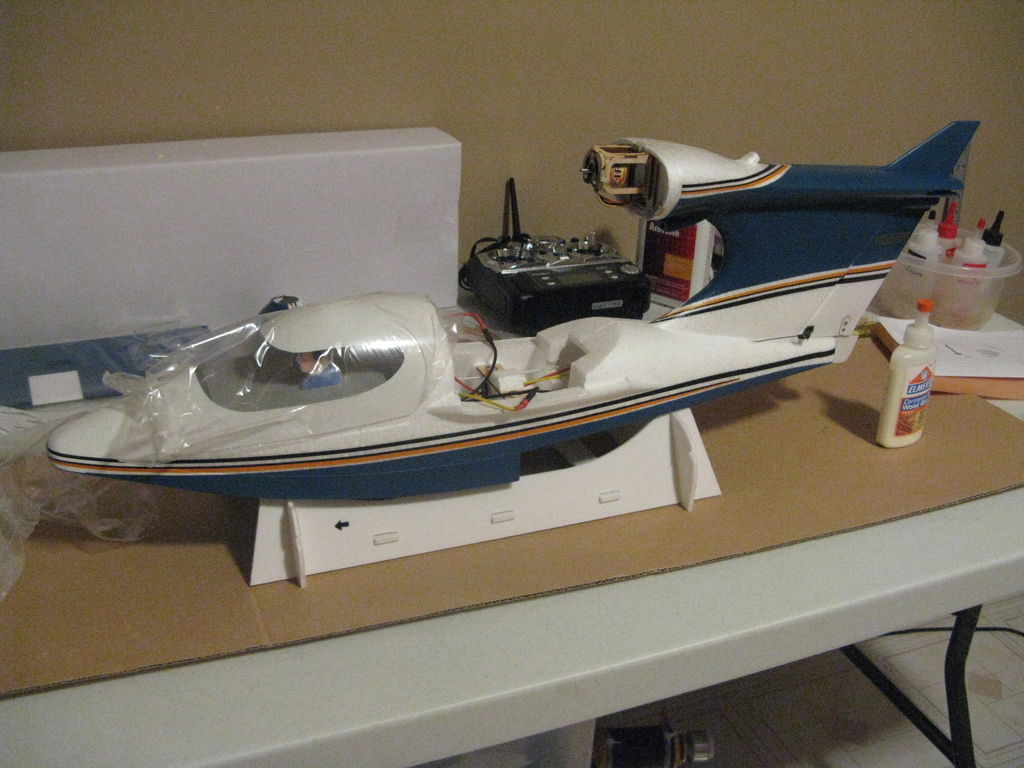 After a couple hours of tinkering around, it was ready to go. I had two issues with this kit so far. 1. The aileron pushrods as installed were too far away from the wing (in the vertical direction) and bound against the fuselage inside. The solution (I hope) was rather easy. I put a Z-bend in the pushrod to gain the required clearance. I cringe at doing this, but hopefully since it’s a light and relatively slow park flyer, the extra play in the linkage won’t bite me. 2. I was missing one set screw for the elevator linkage. I was able to get a reasonable replacement at my local hobby shop. As of right now, I haven’t flown here yet so I don’t have any flight comments, but she sure looks purty.

Here she is just waiting for a decent day: 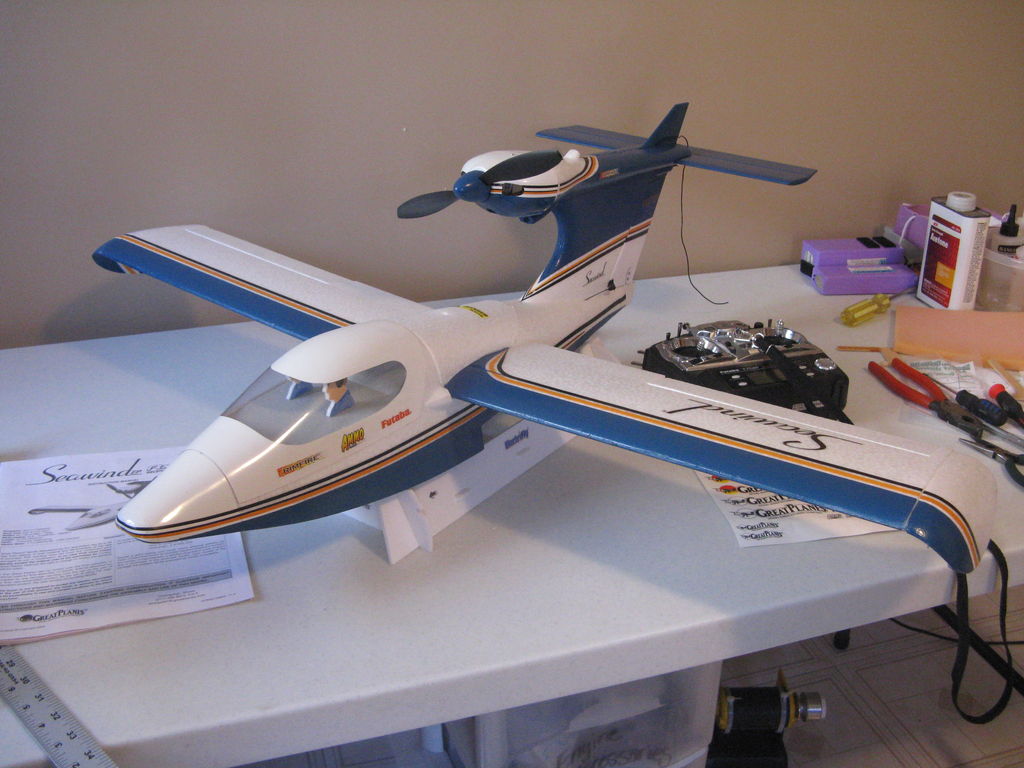 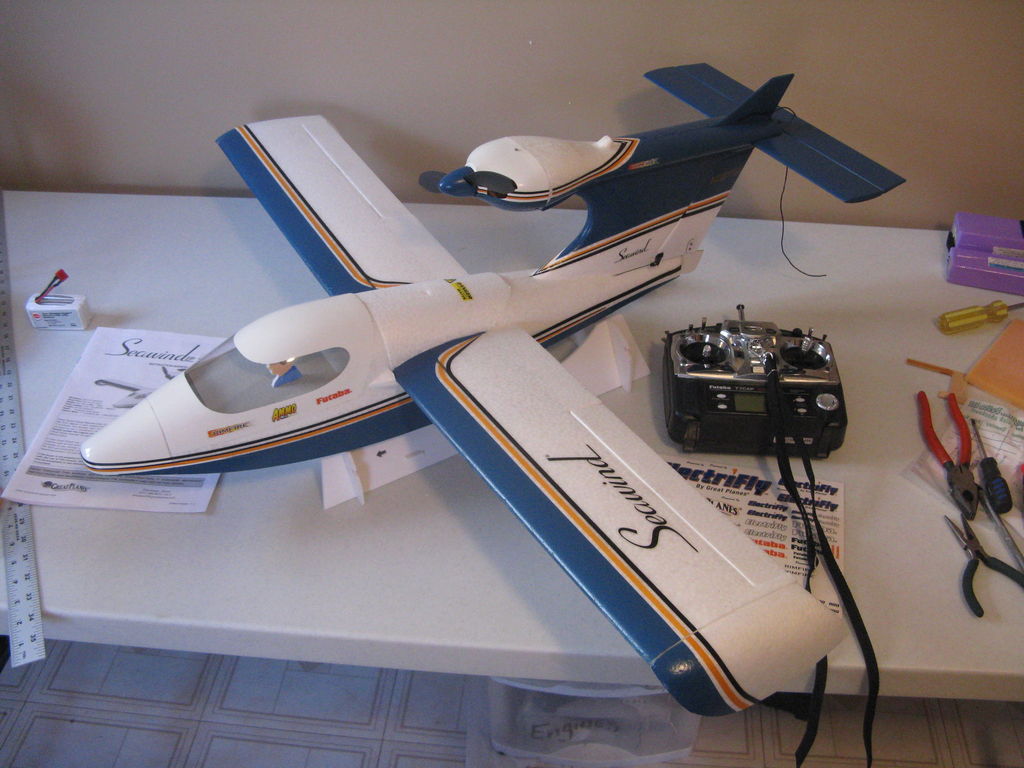 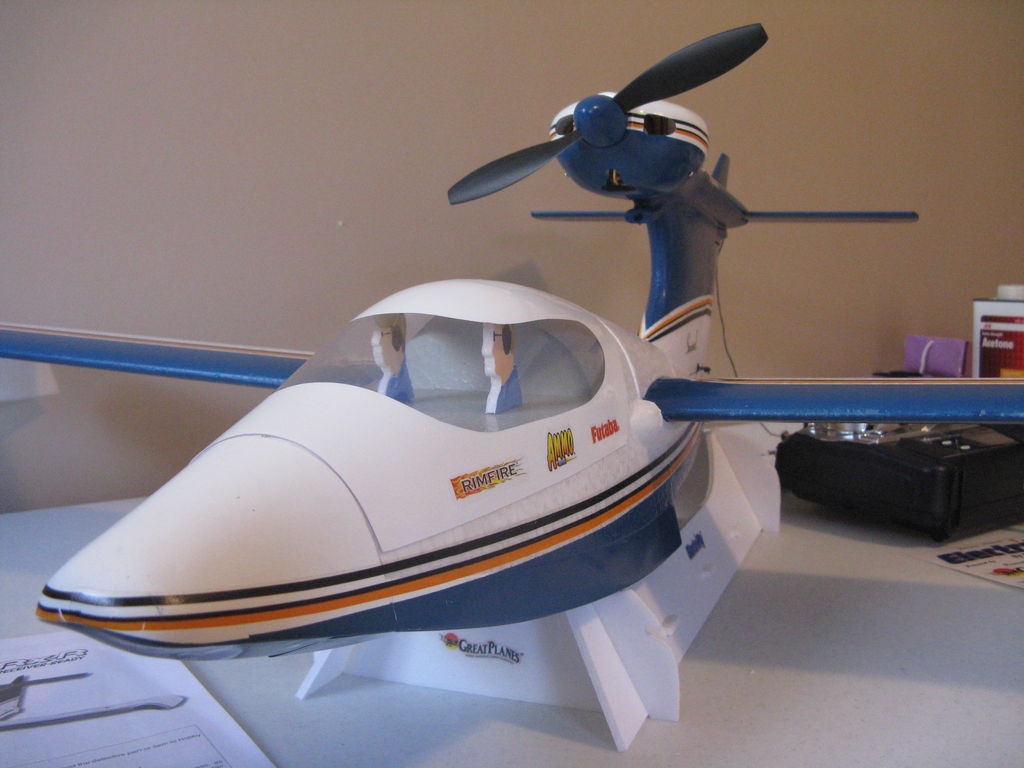 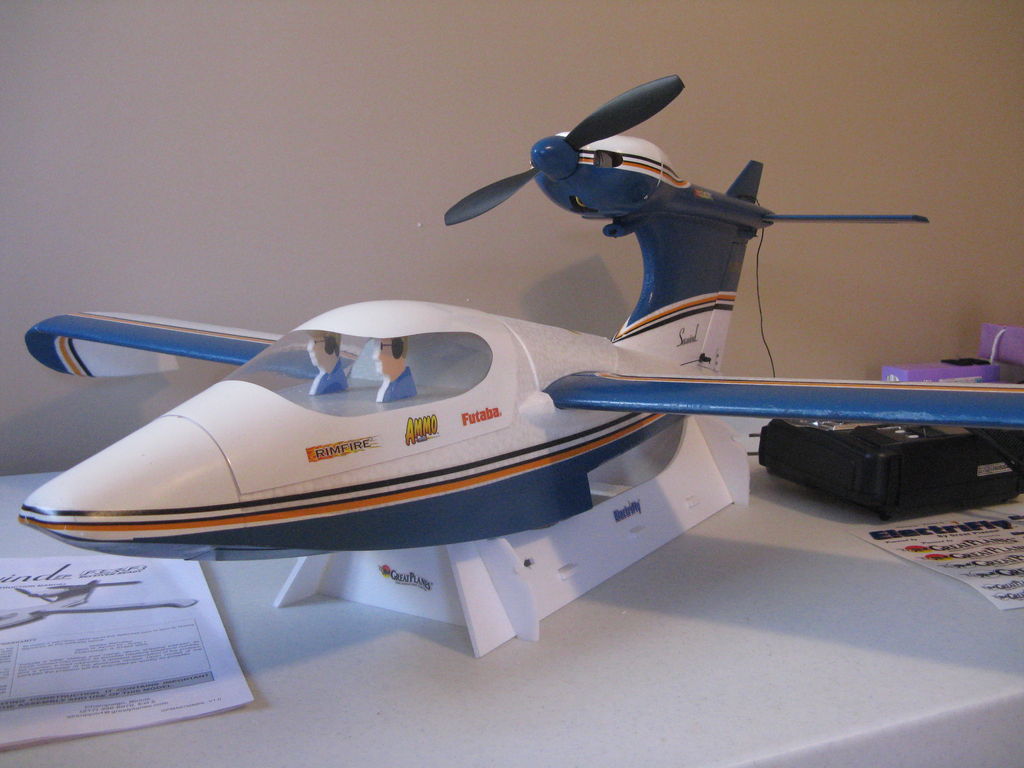 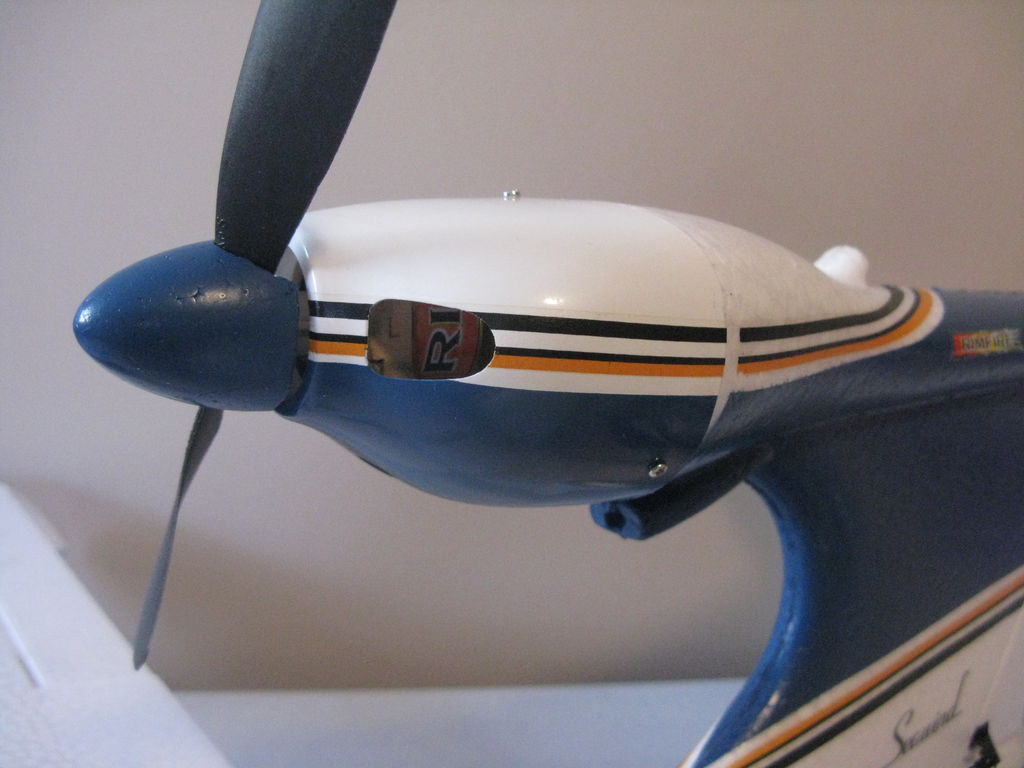 Here is a full scale Seawind on the flight line at EAA, 2008: 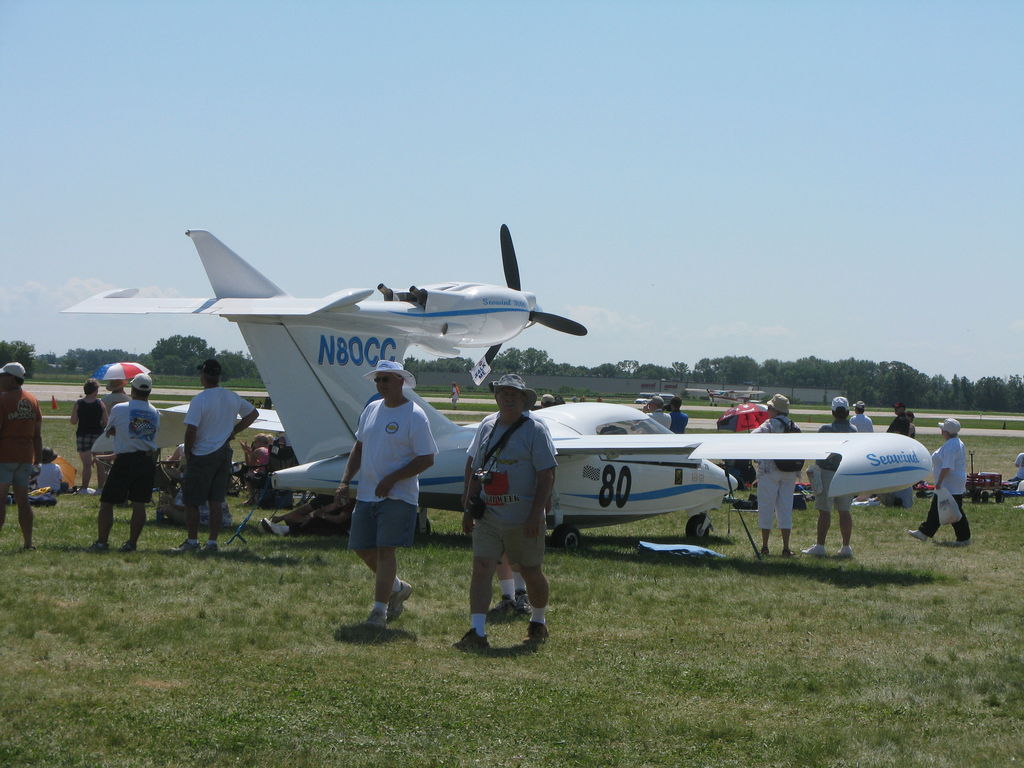 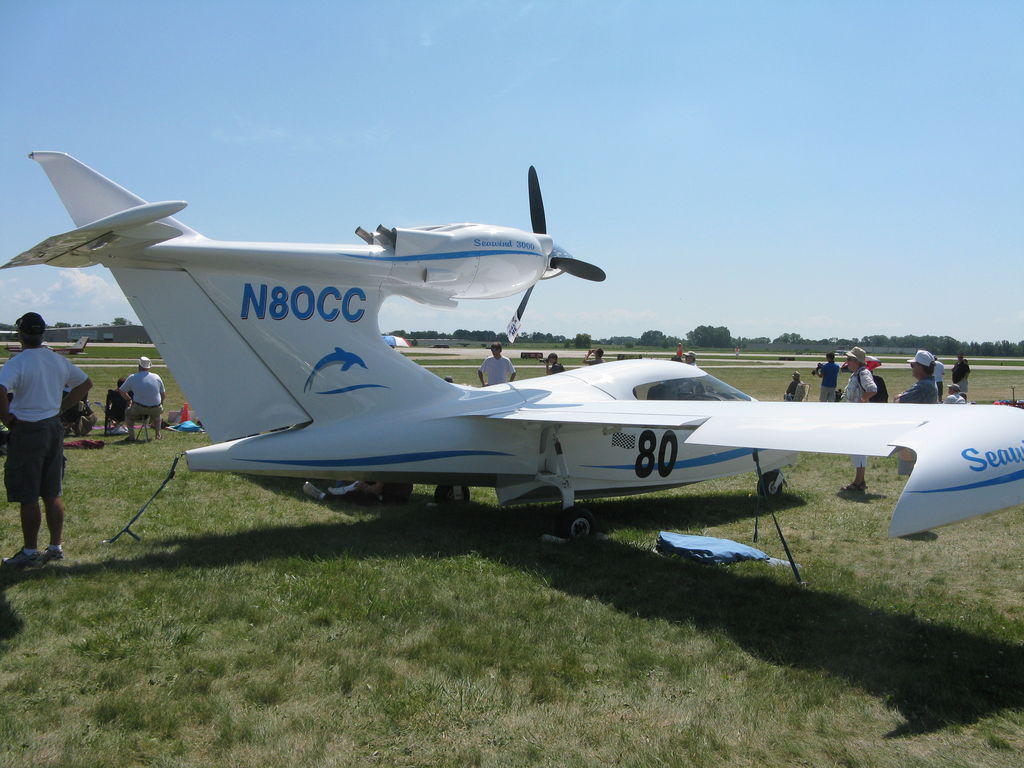 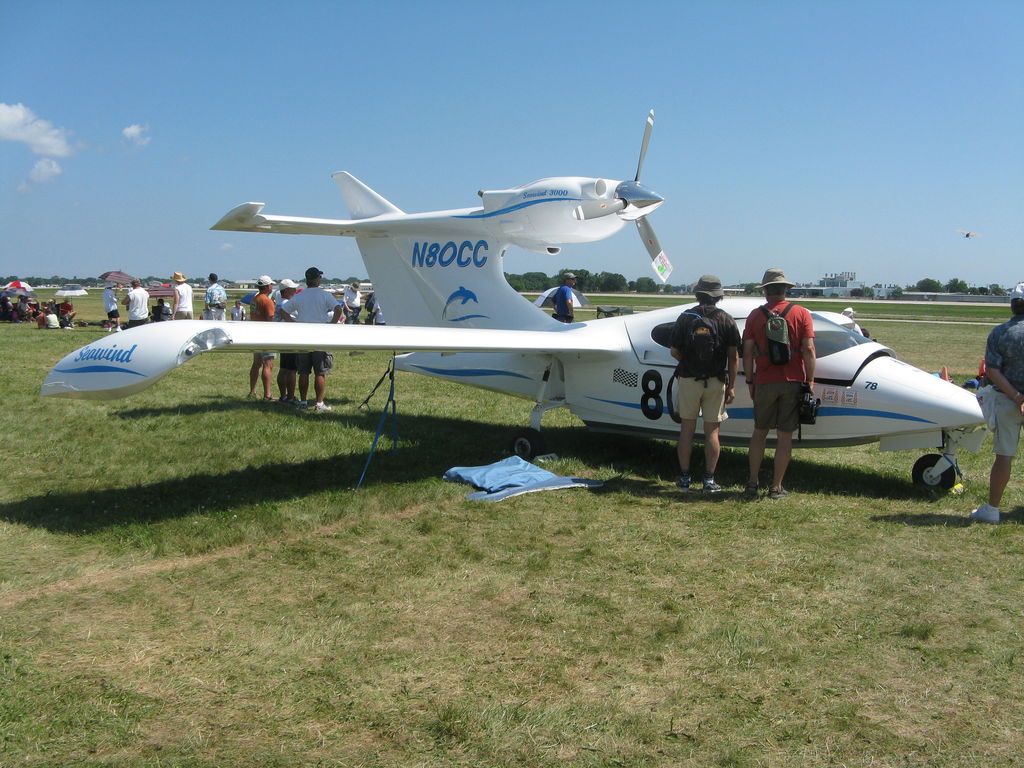