Model Aviation also has a nice review of the Polaris: http://modelaviation.com/modelaeropolarisultra

My story is that I missed one of the model aero sales by a day or two so I emailed the owner to see if I could sneak in my order late.  He replied that he had a couple unpainted polaris arf’s and he’d be willing to give me a package deal on one of those.  So I figured it couldn’t be that hard to paint a foam model and off I went.

The aircraft arrived completely unpainted. The foam was white, and even the plastic parts were just clear.  I test fit a few of the pieces and it sure was looking pretty cool even without paint: 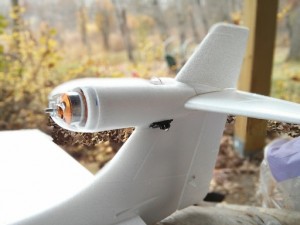 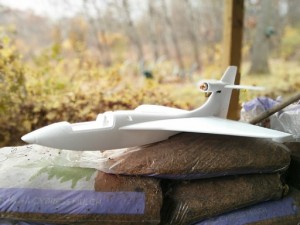 The assembly process is pretty straight forward and the instructions are good.  It’s perhaps a bit more work than some of the newer foam arfs.  It took me a couple evenings (including the extra work of painting.)  But, there was nothing too difficult.  I chose to mount my elevator servo externally to simplify the install.

Because I was painting the model from scratch, I got to make all the choices.  That is good and bad.  I decided to try to keep things simple and roughly follow the original scheme.  I happened to have flat gray primer in a can, and then I ran to the local hardware store and picked up a can of bright red.  So those were my two colors.  The cockpit and dorsal vent got painted flat gray.  The cockpit piece is removable for swapping flight batteries so it was easy to get a nice clean edge there. 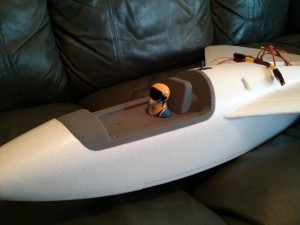 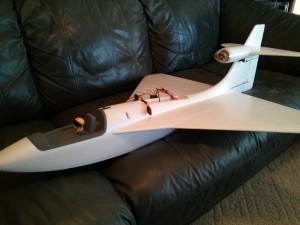 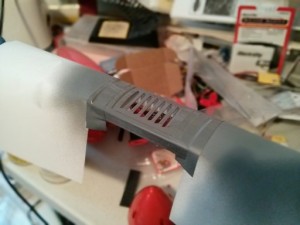 Painting the color was a bit more work.  I’d never done this before, not exactly, so I had to make things up a bit as I went along.  It turns out that if I hit the foam surface hard with the spray paint, the propellant would melt the foam. That wouldn’t be a good thing.  Same problem with the primer.  I did some googling and water based spray paint exists, but I didn’t have it in hand.  I found some test foam and it turns out that if you start by lightly dusting the surface from a good distance (maybe 18+ inches) from the surface.  This lets most of the propellant evaporate off before it hits the foam, and as the dust accumulates the surfaces is more and more protected.  So I did this trick with the primer and then later could paint normally over that with the color layer.

I decided to use electrical tape to mask the paint areas.  This was good in the sense that it didn’t seem to bleed too much, but bad in the sense that it was too sticky and pulled some of the shiny foam finish off when I removed it.  That’s hard to notice though so I guess it wasn’t a complete disaster.  I layed down my exact lines and then masked off with newspaper after that.  One thing I discovered though is that the spray goes everywhere.  It managed to sneak through some cracks I thought were sealed.  Again, not perfect, but not too noticeable on the final result so I guess it’s not the end of the world. 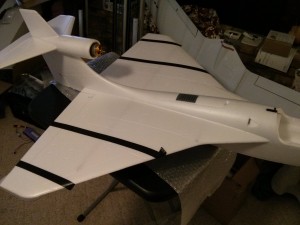 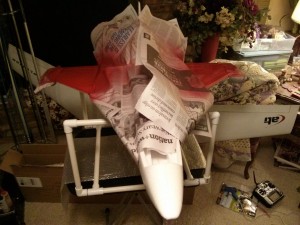 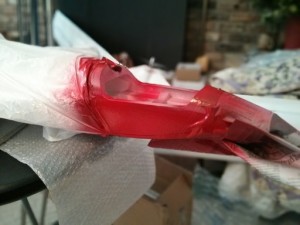 After painting the color areas, I went back with 1/2″ electrical tape and used that as edge trim to hide paint edge and tidy things up.  Again, not perfect and kind of crude, but I think it turned out pretty sharp in the end. 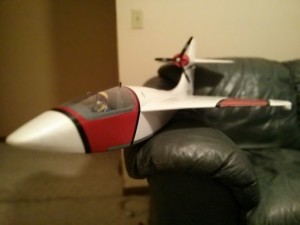 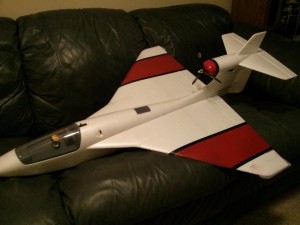 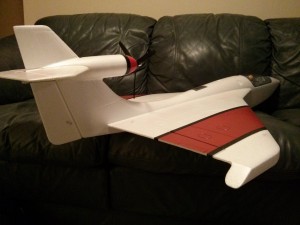 I painted the bottom of the wings flat gray to differentiate them from the top, and with the 1/2″ black tape on the edges I think it set it off and made it look pretty sharp.  I’m happy with the result. 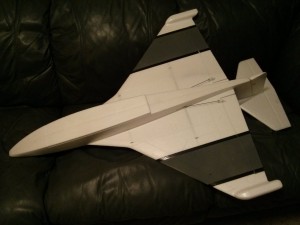 Here is the end result.  The canopy is glued on, the cowl is painted red and attached.  3-bladed prop looks great.  The decals are applied in the final shot. 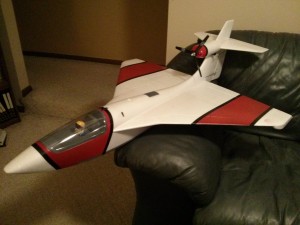 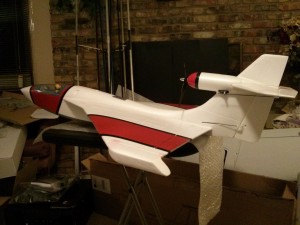 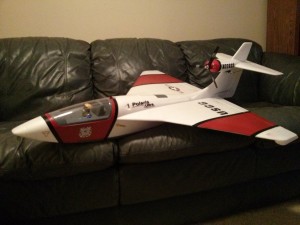 I don’t have any flight videos or pictures yet, but I did do the maiden flight. I waited and waited (almost a month) for decent weather and finally got a day with almost dead calm winds here in MN.  The Saturday after Thanksgiving was the day.  There is a small lake across the street from my house and this time of year it is frozen.  Fortunately due to early extra cold weather, the ice on the lake was thick enough to walk on safely.  So I put on my boots and headed out to find sunshine, upper 30’s, and dead calm winds.  It was later in the afternoon, but the sun was still bright.  The first flight went perfect.  It needed a bunch of clicks of right trim and a couple clicks of up, but once I got her dialed in, then WOW!  She really flies spectacularly.  I love how you can pull high alpha in the turns to make them extra tight.  She tracks and handles so nicely, like she is on rails.  She looks so sweet in the air!  Take offs from the snow were amazingly smooth.  I was flying on some tired old 3S batteries, but honestly that was plenty of power and plenty fast for the area I was flying.  It is a relatively long model so it is extremely stable in pitch.  It is all around really wonderful … looks and flies spectacularly!