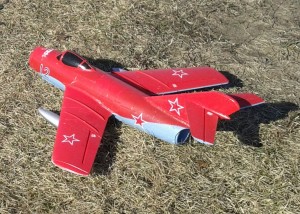 Here is a launch tip for anyone who’s struggled to get the Hobby Lobby MiG-15 airborne reliably:

First, recognize that at FULL throttle, there is a small tendency to want to pitch up (probably due to the large mid-T tail configuration more than thrust lines.

The problem: At full throttle and very slow speeds, the tendency to nose up is stronger than the control surface effectiveness, so right after the aircraft is thrown, even with full down elevator you may not be able to overcome the nose up force of the motor. This leads to the aircraft floundering … the full thrust is pushing the nose up, keeping a high angle of attack, and forcing slow flight speeds. The control surfaces can’t compensate due to slow flight speeds and no prop wash to help out. You can’t push the nose down, you never begin to accelerate, and often the flight ends after a few seconds as the aircraft stalls/flops/cartwheels in.

The solution: Launch at 2/3 to 3/4 throttle. (Basically keep the throttle as slow as you dare on launch.) Throw the aircraft level or even on a slightly nose down trajectory. This reduces the tendency to nose up, allows gravity to help accelerate the aircraft a bit, and allows the aircraft to accelerate naturally, and fly off as expected.

The launch problems with the MiG-15 are EXTREMELY frustrating, but once you get your launches dialed in, this little bird is a blast and really performs well! One final tip: this MiG does have a nasty spin if you manage to stall it. I try to hold at least 1/3 to 1/2 throttle through my turns and I’m careful not to pull too hard on the elevator. Let the plane fly itself, keep your control inputs light and you should have no trouble staying above stall/snap speed.