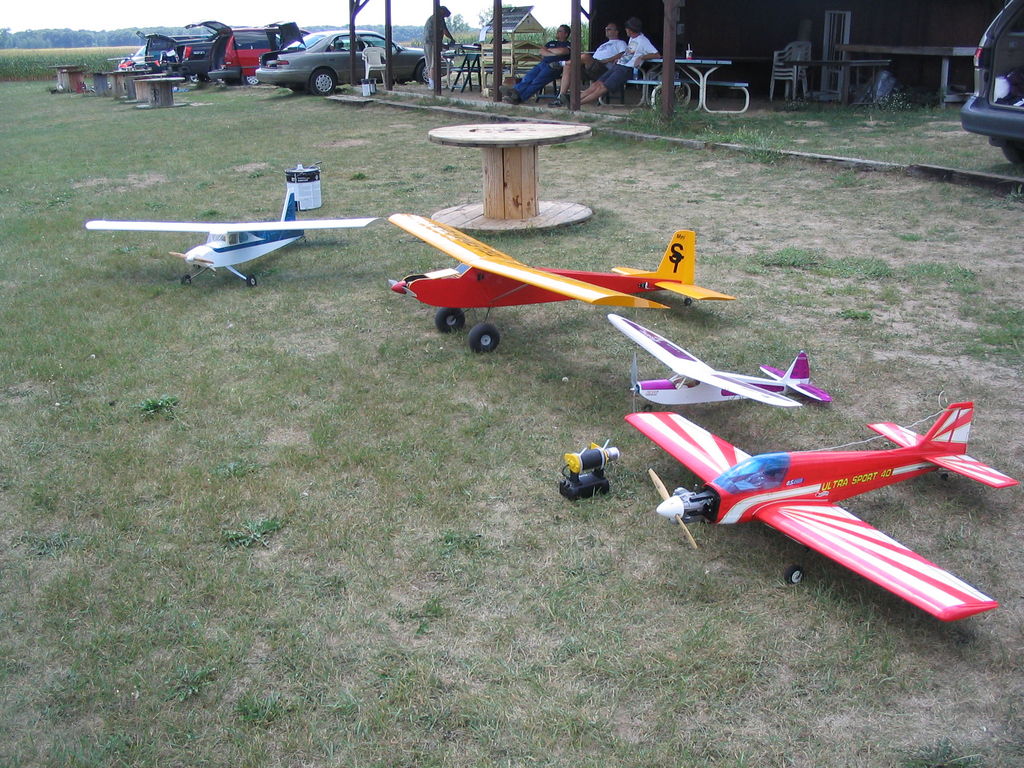 I flew the UltraSport40 at the SPRC club annual Turkey Fly. The gear repair held up well and the plane flew great. I put in 3 flights today.

I repaired the right main gear and straighted up the left main just a bit. The left main gear wire was bent slightly in a cross wind landing early in the plane’s career.

1 short flight and I broke the right main gear out of the wing landing on the grass. Dohhh! 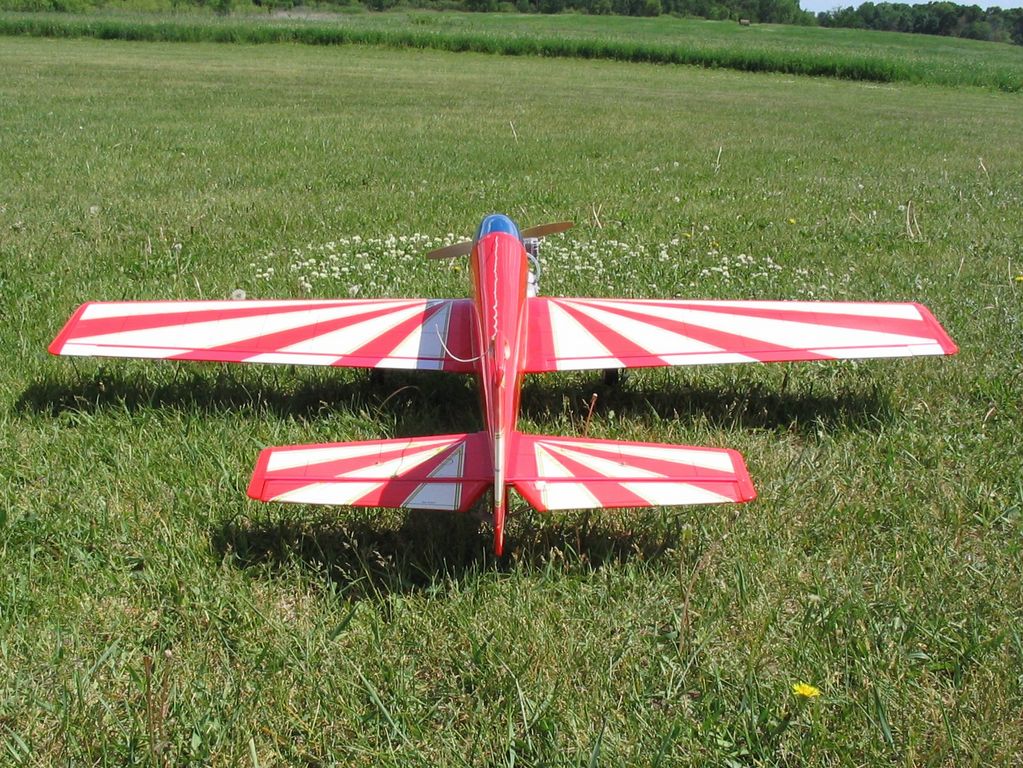 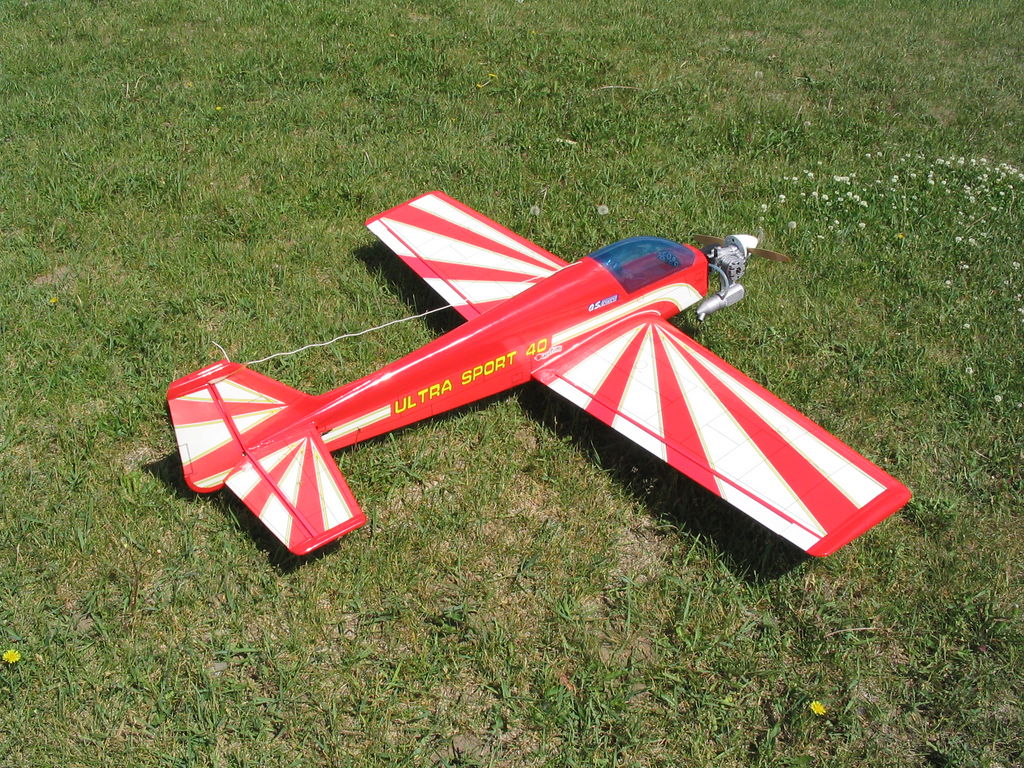 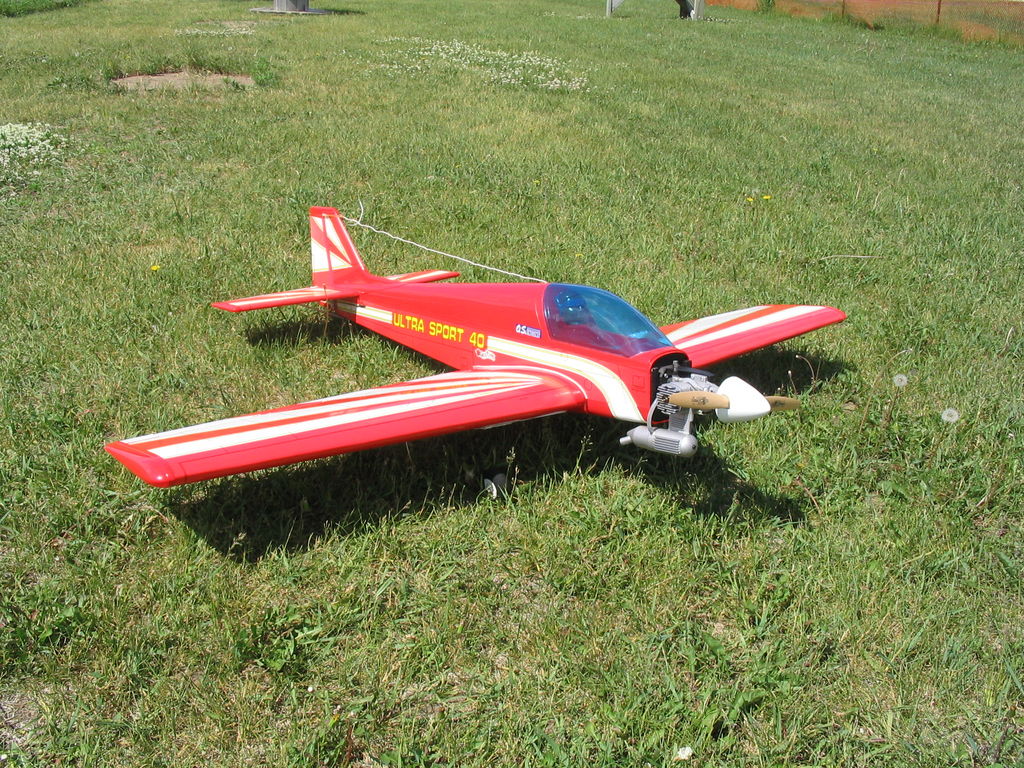 img_3797 I did 3 really nice flights with the UltraSport this evening. I love this airplane! It flies so awsome. It has enough power where you can roll inverted right after takeoff and continue your climb out, transitioning into an outside loop and topping out about as high as you’d ever want. But I also have a low pitch prop so I can start my approach at 1000′ AGL off the downwind end of the runway. Pull the throttle to idle, roll into a vertical dive, round out my approach towards the bottom, and she slows right down for landing. The low pitch prop at idle acts like a big air brake. I could put a higher pitch prop on and get a lot more top end speed, but I really like being able to keep my landing approaches under control.

I have been getting jittery radio performance out of the onboard system. I did some swapping and the only thing left it can be is the receiver. So this evening I purchased a new receiver and crystal. I hope this takes care of the issue because I really want to get this hotrod back in the air. Lately I’ve been only flying my Kadet and Cub which is relaxing and nice, but I’m feeling the need for speed!

I put in 3 more nice flights Suday afternoon after church while the girls were napping. I’m getting a bit more confident with it and bringing my manuevers closer to the ground and closer to me. As I can see them better closer in, I think everything improves. Big beautiful vertical manuevers with this one. I really like all the braking effect you get with the 11×6 prop at idle even in a 90 degree vertical dive. Replaced the spinner before the first flight and all is happy.

I flew the ultrasport for the first time in over two years. I remember it being really fast, especially on approach which made it hard to get on the ground. In fact I remember being just a little afraid of it, which is probably why I haven’t flown it in over 2 years. I initially installed an 11×7 prop, so I switched to an 11×6 and that seemed to make a huge difference. The braking action from the lower pitch prop helps slow the aircraft down at idle. This makes approaches much more managable.

I think I have a near perfect combination for this airplane: an OS 46FX turning an 11×6 prop.

Looking back on some of my earlier comments from 2.5 years ago, I can see that I have a lot more flying experience since then with a variety of airplanes. This is still my biggest hotrod, but the 11×6 prop really helps tame the landings.

It still really scoots, even with the 11×6. I think it has better acceleration off the ground and I think a bit better vertical. I really like it’s straight tracking through just about any maneuver. I’ve never met a plane I didn’t like, but this one might be my new favorite! (for now.) 🙂

I need to straighten the right main gear wire from a cross wind touch down 2 years ago, and one screw on the spinner stripped out. One of these days I should finalize the cowl installation.

It’s my birthday again today, so I can say that I was able to successfully assemble this ARF and fly it in the space of one year. 🙂 I’ve put a couple more flights on last week, and it is a joy to fly. If I push out my downwind leg further away from myself, that gives me more space to do a gentler turn to base and final. This helps make the approach and landing much more smooth and solid. Initially, I was trying to crank her around too sharp on my turn to base/final and was loosing a lot of altitude and doing a lot of pitch oscillation. That didn’t hurt anything, but probably gave any observers a few white knuckles, not to mention myself. 🙂 I’m new to such a high performance aircraft, but I’m learning! If you can learn the basics on a trainer, and get up some confidence and experience in an intermediate aircraft, this one is a *blast* to fly. It took me 20 years off and on to get here, but it’s a lot of fun. I was going to sell my old sweet stik on ebay now that I have the ultra sport flying, but I’m semi-tempted to recover it and restore it … it still is a sweet flying airplane.

I was waiting for the perfect day, but the weather and my schedule were not intersecting. But, the winds didn’t seem too bad today so I packed her up and headed to the field. It’s always 5-10 mph windier at the field than the weather report from the local airport but it was mostly down the length of the field so I fired up the engine and blasted off. It was further out of trim than I was expecting, but within the range of my trim adjusters. The .46FX really hauls it across this sky. This is a slick quick bird. Very nimble and has a very light feel. I can make this thing do things my old sweet stik could never quite do. I’m no kind of aerobatic pilot, but I can flail around the sky and usually stay above the deck. She can almost fly verticle, but tough to do much of that in the really stiff wind we had today. I chopped the throttle to test slow flight characteristics. It’s very nice at slow speed, and I could haul back pretty far and it would just float along, so I pulled all the way back and she almost instantly stalled and did a decisive snap rolled. There’s lots of rudder authority to waggle around the tail with. I’m not sure what their called, but it’s alot of fun to do a high speed pass, pull up and go vertical, chop the throttle and as she comes to a stop, go full rudder to nose over. This leaves you in a dive and if you pull out, you are coming right back at yourself. This move is fun power off or power on. I was pretty tentative in my flying given the wind and the first flight jitters, but all in all a really nice bird.

Landing is something I need to practice more. The ultra sport is a *lot* faster than my sweet stik, and drops the nose a lot more in a sharp turn. It also does a really nasty snap roll on stall. I’m not sure it’s possible to stall the sweet stik. I wonder if I fly my down wind leg a lot further out if that would give me more space to do a gentler turn to base/final? My landings were all mostly successful, although I’m shakey in the turn to base and final. For one landing I got hit with a decent cross wind gust right as I was planting the mains. Both main gears are bent a couple degrees to the left … oh well, that should be an easy tweak.

I think for the most part I can get her up and back down safely, even in a pretty choppy and strong breeze so now I just need to practice, practic, practice. 🙂

Late Friday afternoon I ran two tanks of fuel through the OS .46 FX engine to begin the break in process. This is an awsome engine and really generates a *lot* of power (especially compared to the old K&B .40 I bought in 1981.) Saturday morning I was prepared to try a first flight, but it ended up being pretty windy with gusts up to 25 mph so I passed. I did take my new/old super sportster 40 up for a spin, but didn’t fly for too long … it just wasn’t the greatest combination of wind direction vs. sun angle. (I removed some nose weight from the SS40 and I think it behaves a bit better and has a little bit gentler feel to it. It’s a bit tail heavy according to the instructions, but flies more like it is overly nose heavy.)